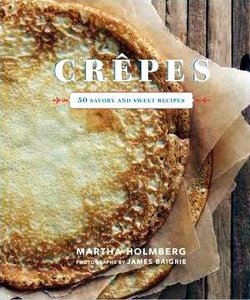 Martha Holmberg is uniquely equipped to bring crêpes into the home kitchen. Trained at the renowned La Varenne cooking school, she has been a food writer, editor, and cook in the United States, England, and France for the past two decades. Her lifelong love of this favorite food is apparent throughout this collection of 50 sweet and savory recipes, ranging from the simple and snacky Butter-Sugar-Lemon of her teenage years to the crepe cakes and cannelloni of an accomplished cook.

Her encouraging instructions and master formulas produce beautiful crepes and tempting sauces and fillings that pay homage to the classics while embracing ambitious and fascinating flavor combinations and ingredients.

Martha Holmberg is the former publisher and editor of Fine Cooking magazine, the founding editor of MIX magazine, and the former food editor of the Oregonian newspaper. She is also the author of Puff, a Julia Child Award–finalist cookbook. She lives in Portland, Oregon. James Baigrie is a San Francisco–based photographer specializing in food, interiors, and travel.

Win the Book ...We thank Chronicle Books for sponsoring this week’s Cookbook of the Week and the FREE Giveaway! To enter, please use the email form below. Just enter the name of the cookbook in the message box and submit. So easy! Giveaway ends midnight, July 29th, 2012.

Congratulations to the Winner – Stephanie Bruck

Buy the Book…Crêpes – 50 Savory and Sweet Recipes for your cookbook library, or as a gift!

KosherEye Cookbook Notes: Learning to make Crêpes is a window on such wonderful delicacies such as filled desserts, blintzes and entrees of all sorts. If making crepes with meat or poultry ingredients, simply substitute soy, almond or rice milk for dairy milk, and margarine for butter. It is an ideal item to make and freeze for later use.

Watch a video demonstration on how to make Martha Holmberg's Versatile Crêpes recipe.