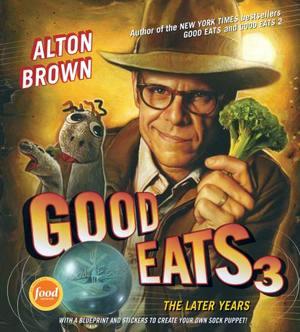 As Good Eats enjoys its 14th season on the Food Network, its popularity continues unabated. Fans can't get enough of Alton Brown's wildly inventive, science–geeky, food–loving spirit. It's no wonder, then, that the first two volumes in Brown’s Good Eats series were New York Times bestsellers.

Like Volumes 1 (Good Eats: The Early Years) and 2 (Good Eats: The Middle Years), Good Eats 3: The Later Years packs a bounty of information and entertainment between its covers. More than 225 recipes are accompanied by hundreds of photographs, drawings, and stills from the show, as well as lots of science–of–food facts, cooking tips, food trivia, behind–the–scenes glimpses—and bonus sock puppet instructions! In chapters devoted to everything from pomegranates to pretzels, Marshall's whisky sauce to molasses, Alton delivers delicious recipes along with fascinating background in a book that's as fun to read as it is to cook from. Good Eats 3 will be a must–have addition to the bookshelves and kitchen counters of Alton lovers everywhere.

About the author:
Alton Brown is the writer, director and host of Good Eats (winner of a 2007 Peabody Award) and the commentator on Iron Chef America, both on Food Network. The author of six cookbooks for Stewart, Tabori & Chang, and the recipient of two James Beard awards. He lives near Atlanta, so we consider him a KosherEye neighbor!

Praise for Good Eats 3: The Later Years:
"Alton's cookbooks are non–traditional to say the least. In addition to great recipes, they're loaded with humor, science, and great tips on selecting ingredients."
—Northeast Flavor magazine

Win the Book ...We thank Stewart, Tabori & Chang for sponsoring this week’s Cookbook of the Week and the FREE Giveaway! To enter, please use the email form below. Just enter the name of the cookbook in the message box and submit. So easy! Giveaway ends midnight, August 19th, 2012.

Congratulations to the Winner – Rena Hauer

Buy the Book…Good Eats 3: The Later Years for your cookbook library, or as a gift!

KosherEye Cookbook Notes:
We must admit that we are huge fans of Alton Brown and enjoy his cooking show. Behind the facade of humor, lurks some excellent cooking facts and recipes. Most of the recipes are from his Good Eats show and can be found online. But to have them combined in a book, complete with his commentary, tips, drawings and photos is a treat. There are indeed recipes that are not suitable for the kosher consumer, but there are enough recipes that are and, thus, make this cookbook a nice addition to our cooking library.

For your enjoyment, watch Alton Brown speak about Good Eats 3.