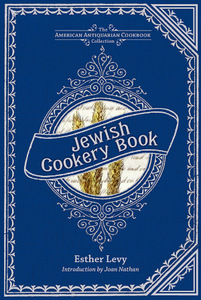 First published in Philadelphia in 1871, this historical culinary volume from the American Antiquarian Cookbook Collection is a facsimile edition of the first Jewish cookbook published in America, and only the second written in English. The first was written in 1846 by Lady Judith Montefiore.  The American Antiquarian Society (ASA), founded in 1812, collects and preserves printed materials from the early American experience, which includes 1,200 cookbooks.

The purpose of Esther Levy’s Jewish Cookery Book, was to assist European Jewish immigrants adapt to American kitchens and life in the New World, while maintaining their religious heritage. It includes a Jewish calendar, household management advice, culinary tips and intriguing original recipes for home medical remedies following 19th century Jewish law regarding cooking for the Sabbath and Jewish holidays

Who was Esther Levy, the author? All that is known  is that her maiden name was Jacobs, and she was likely a native Philadelphian. Her recipes show strong German influence. Her English is flawless, while her Hebrew seems nonexistent. Some of the Hebrew names in the Jewish calendar section are almost unrecognizable. This can possibly be explained because in the mid 1800’s, it was not unusual for observant American Jewish families to allow their daughters only the minimum education required for a future wife, such as learning about Jewish dietary laws and ritual bathing.

Some brief excerpts:
“Egg Plant. – Cut it into slices, about a quarter of an inch thick, and let them soak in cold water and salt for two or three hours. then fry them with egg and flour a nice brown color”

“Coogle, or Pudding, and Peas and Beans.…Let it cook a day and night..” (Need we say more?...this is  Esther Levy’s version of cholent)

“Matzo Cleis Soup. – (For Passover)“Set your soup as in other soups. Soak two matzos in cold water, and then fry two or three chopped onions in some suet fat; squeeze and strain the soaked matzos, beat it up with three or four eggs and the meal; add the onions and chopped parsley and mix all together with some pepper, salt, ginger and nutmeg grated and make it into round balls, pretty stiff and boil for ten minutes, not more, or they will break.”

On the subject of Passover. – “Before using the kitchen tables, they must undergo a thorough scrubbing, and be rinsed with scalding water.. .Cisterns must be cleaned, chopping boards must either be new or those that were used for a former Passover. It is necessary to be very particular, so that there shall not be the slights part of leven in our habitations.”

Win the Book ...We thank Andrews McMeel Publishers for sponsoring this week’s Cookbook of the Week and the FREE Giveaway! To enter, please use the email form below. Just enter the name of the cookbook in the message box and submit. So easy! Giveaway ends midnight, December 16th, 2012.

Congratulations to the Winner – Tuvia Natkin

Buy the Book…Jewish Cookery Book for your cookbook library, or as a gift!

KosherEye Notes:
This book offers the reader a glimpse into the early American kosher Jewish kitchen. It should be read and savored as a historical culinary and lifestyle record.  We found it illuminating, entertaining, insightful and informative. Interestingly, many of the recipes, household hints and medical treatments are remarkably quite familiar and some, although a bit more sophisticated now, are still in use.