One Egg Is A Fortune 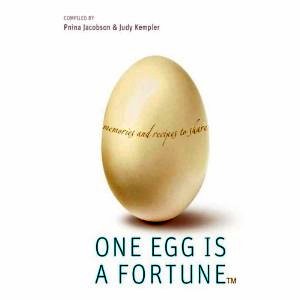 Compiled by Judy Kempler and Pnina Jacobson
Published by Oneeggisafortune

Through the collection of 100 recipes, the importance of Jewish culinary heritage is shared.  Each contributor recounts how their enjoyment of food is the common generational thread that binds them to the past.  Indeed, the title of the book was inspired by one of these beautiful stories.

Pnina Jacobson immigrated from South Africa to Sydney, Australia in 1987. Judy Kempler is from Sydney, Australia.  With a shared interest in food, and a mission to make a difference, Kempler and Jacobson, are donating a portion of the proceeds of the book to support Jewish eldercare.

We were extremely impressed by the international recognition given to this beautiful cookbook!

KosherEye Notes:
Many of the book’s directions are based on the metric system and Celsius based oven temperatures. However, there is a handy, American friendly easy to use conversion chart included.

Win the Book...  We thank Hamodia Treasures Publishers for sponsoring this week’s Cookbook of the Week and the FREE Giveaway! To enter, please email us at ContactKosherEye, and put your name and the name of the cookbook in the message box. So easy but entries without this information will not be considered. Giveaway ends midnight, December 30th, 2012.

Congratulations to the Winner – Amy Siegel

Buy the book... One Egg Is A Fortune

for your cookbook library, or as a gift!