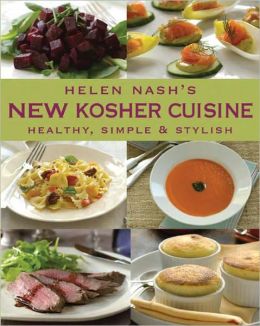 Helen Nash's NEW KOSHER CUISINE features many new and imaginative fusion recipes The book is a mixture of old and new, with an emphasis on nutrition. Particularly unique are her signature dishes, based on traditional Eastern European cuisine.

Helen Nash was born to a rabbinical family in Cracow, Poland, and arrived in the United States as a teenager in 1949. During the Second World War, along with her parents and sister, she spent some of her childhood in labor camps in Siberia and Central Asia. Many of her signature recipes reflect her Eastern European heritage. Helen Nash's New Kosher Cuisine is her third cookbook. She has spent most of her life in New York City and studied with world-famous cooks including Marcella Hazan,and Millie Chan. An accomplished lecturer and teacher, she has given demonstrations at New York University and the De Gustibus cooking school at Macy's, as well as at numerous Jewish organizations and centers.

The book features over 200 recipes, appropriate for weekday dinners, holiday meals, and entertaining, It is meant to be a "go to" cookbook for healthful, uncomplicated cooking, for all dedicated cooks, kosher or not. Both the novice as well as the experienced cook can learn from Helen Nash. There are inventive and creative choices for both vegetarians and meat-eaters. Helen Nash does not believe that "Jewish food should be all about gefilte fish and chopped liver". The recipes in New Kosher Cuisine include many ingredients that have only recently become available to kosher cooks.

From the Critics:
"Her passion for cooking—and for easy-to-follow techniques—shines through her new book. By incorporating exotic ingredients like wasabi powder and panko into kosher cuisine, Nash has created recipes that are deeply respectful of tradition, but at the same time exciting, sophisticated and modern."
– Jean-Georges Vongerichten, award-winning chef, author and restaurateur

"Helen Nash is a legendary cook, and her new collection of recipes is extraordinary.
– Arthur Schwartz, Jewish Home Cooking

"Indispensable for cooks of any level."
– Publishers Weekly

Enjoy these recipes: Rice Salad – a Japanese-style salad that can be a meal in itself, and Beet Soup – which can be served hot or at room temperature

Win the Book ...We thank The Overlook Press for sponsoring this week’s Cookbook of the Week and the FREE Giveaway!

To enter to win the cookbook:

Please email us at ContactKosherEye (just click on the email link), and put your name and the name of the cookbook in the message box. So easy! Giveaway ends midnight, February 24th, 2013.

Congratulations to the Winner – Caryl Lee

for your cookbook library, or as a gift!

KosherEye Notes:
KosherEye recommends this book because of the exceptional collection of recipes, the simple, straightforward advice on technique and tips on stylish presentation. In the words of famed food critic, Craig Claiborne, Helen Nash offers recipes that are "seamlessly kosher and endlessly inventive". We agree!