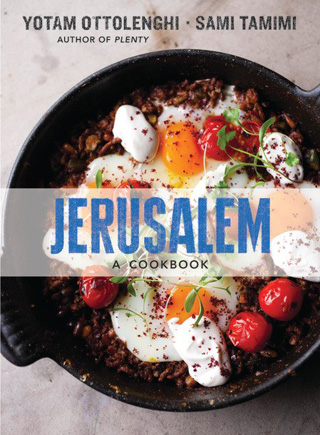 Yotam Ottolenghi and Sami Tamimi are both admired and accomplished chefs who grew up in and around Jerusalem. Sami Tamimi was raised in east Jerusalem, an Arab area --  Yotam Ottolenghi in the Jewish area. Both now live in London. This is Ottolenghi's second book. His first, the popular cookbook "Plenty," was focused on creative vegetarian cooking.

Jerusalem: A Cookbook is much like the city, a vibrant fusion of international and religious influences inspired by the Christian, Muslim and Jewish communities who live there. Add global flavors from Iran, Poland, Russia, Africa, Syria, Italy, France,and the palette widens.

This beautiful cookbook offers 120 recipes with a cross-cultural perspective. The photos are spectacular. The ingredient lists are long and diverse, complete with Middle Eastern spices including sumac, za'atar, cumin, coriander, and cardamom. Recipes for classics such as eggplant, lamb, chickpeas and rice are plentiful as is the selection of rich, decadent desserts. Each reflects the tastes, history and foodways of this ancient city.

There is no question that the book offers its readers a cooking adventure.. The dishes range from simple to complex in method and ingredient. In our opinion, this is a food journey well worth embarking on. Since its publication, cooks have been throwing -"Jerusalem" potlucks, and the book has developed what some would term a "cult" following online.

As Julia Moskin of the NY Times reported: "American food lovers are not only cooking from "Jerusalem"; many of them are cooking their way through it as cooks did with "Mastering the Art of French Cooking" in the 1960s and with "The Silver Palate Cookbook" in the 1980s. "Jerusalem" is the first book in recent memory to join that group, and the first to do it via social media, as well as old-fashioned word of mouth."

This is a KosherEye "gift yourself, gift others" selection. You may buy it here: Jerusalem: A Cookbook

KosherEye Note: Do be aware that although this cookbook is based on the foods of Jerusalem, some of the recipes will require kosher friendly substitutions. We highly recommend this cookbook, even though the kosher cook at times will  need to make some ingredient substitutions. Don't hesitate to consider adding this book to your culinary library or to your cookbook gift list.

Enjoy these recipes from Jerusalem: A Cookbook:

We thank  Ten Speed Press  for sponsoring the Featured Cookbook and for offering a copy of the cookbook to 2 lucky winners!