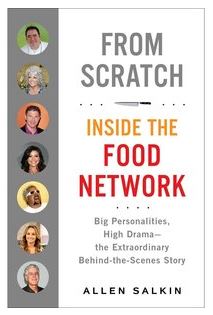 Author Allen Salkin shares the history of the Food Network from its beginning as a struggling cable wanna-be – to a cable powerhouse. He dishes on its executives, its founders and its stars. The fledgling network took the concept started by "dump and stir" shows such as Julia Child's The French Chef, The Galloping Gourmet and The Frugal Gourmet... and BAM! WENT UP A NOTCH. The tiny, scrappy Food Network has grown to nurture America's burgeoning food culture and to become part of 100 million US homes, while earning billions. It combines business, media, food and entertainment, and its stars are beloved and followed by an ever-growing fan base.

Salkin, an investigative journalist who has written for the NY Times and other prominent publications, conducted hundreds of interviews over a three-year period to tell the story of the 21-year-old network. He shares an enlightening account of how the Food Network came to be, and the personalities who rose and fell along the way.

A Few Celebrity Morsels:
Emeril gave the network breakthrough star power, but the network did not treat this talented chef gently. His rise and fall as a Food Network star is documented.

The story behind Paula Deen's diabetes—and her "treatment" when it was revealed she was a diabetes-medicine spokesperson. And then, the story behind the controversial remarks, which ended her Food Network career.

After Ina Garten's first experience filming at her home, she almost ended her TV career. She cut herself on a mandoline, the crew trampled her lawn, trod mud on her carpets , her septic system overflowed and she was in tears throughout.

Guy Fieri, and the hedge fund billionaire who paid him $100,000 to be his friend for a day.

Rachael Ray --hard working, comfortable and easygoing on camera. Not a diva in any way and her show runs smoothly. But, she almost burned down Emeril Lagasse's set during her screen test. And as author Salkin says, " Don't try to keep pace drinking cocktails with Rachael!"

Win the book! We thank the publisher, the Penguin Group, for sponsoring our Featured Cookbook and the Free Giveaway. Three lucky winners will each win a copy of "From Scratch: Inside the Food Network" . This giveaway ends at 11:59PM on July 7, 2014

If you just can't wait to see if you are a winner, or if you would like to buy this as a gift or for your cookbook library, you can order online here: From Scratch: Inside the Food Network

This giveaway has ended, and the lucky winners are Kristin McCall, Cindy Korman Hodkin, and Teri McHugh.