Zahav: A World of Israeli Cooking 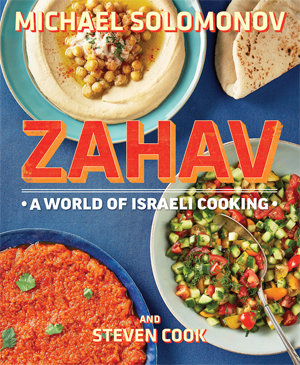 It is not often that we begin our cookbook features with a mazeltov, but this book deserves our congratulations. Zahav was just chosen the James Beard cookbook of the Year. Quite an achievement! Michael Solomonov and Steven Cook's Zahav: A World of Israeli Cooking won the coveted book of the year award at the James Beard Awards last week, in New York. The book also won in the International category. Solomonov, a James Beard Award winning chef presents Zahav, his interpretation of “the glorious cuisine of Israel for American home kitchens; he had our attention from the beginning when we read the dedication.

The cookbook is lovingly dedicated to his younger brother Mark who was murdered at age 21 by Hezbollah snipers when he was serving in the Israeli army. Ever since he opened Zahav in 2008, chef Michael Solomonov has been in the culinary forefront with his classic and contemporary  presentation of Israeli cuisine. His food has been covered by national media including  the New York Times, Bon Appétit ("an utter and total revelation"), and Eater ("Zahav defines Israeli cooking in America").

The 150 recipes in Zahav focus primarily on the Middle East melting pot of Israel, including the influences of  North Africa, the Mediterranean, and Eastern Europe. Zahav shares Solomonov’s story and how he evolved in his culinary passion for the techniques and foodways of his birthplace. The book is partially a memoir, sharing his journey along with anecdotes and personal thoughts about his family, his private life, and Israeli culture. Zahav was written with his business partner, and restaurant co-owner Steven Cook. The recipes range from simple to advanced creations, but many say that “the  hummus alone is worth the price of the book."

A KosherEye gift yourself, gift others selection. This is both a practical cookbook for both the novice or experienced home cook, and an important addition to a culinary home library, especially one that values recipes for authentic Israeli cuisine. Please be aware that the authors are also popular restaurateurs, but at this time, their locations are not certified kosher.

Cookbook Giveaway - 3 readers will be randomly chosen to win
Zahav: A World of Israeli Cooking

If you just can't wait to see if you are the winner, you can order this cookbook online here: Zahav: A World of Israeli Cooking

Enter to Win with Rafflecopter