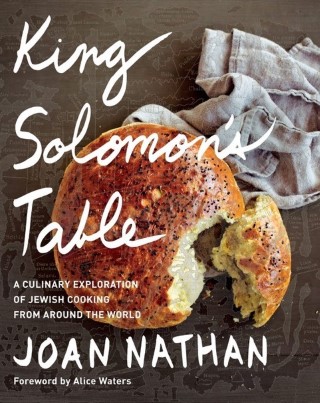 King Solomon’s Table: A Culinary Exploration of Jewish Cooking from Around the World
by Joan Nathan, Alfred A. Knopf, Publisher

King Solomon’s Table is a culinary milestone. It is a book that that travels the world with its readers, and explores foods from ancient and biblical tables through stories, recipes, memories and historical facts. Joan Nathan has been gathering cultural and culinary gems for many decades. In our opinion this book is a culmination of her work.

A note from the publisher:
“King Solomon’s Table is a compendium of Jewish recipes from around the globe and across the ages. Driven by a passion for discovery, the biblical King Solomon is said to have sent emissaries on land and sea to all corners of the ancient world, initiating a mass cross-pollination of culinary cultures that continues to bear fruit today. With Solomon’s appetites and explorations in mind, Joan Nathan gathers together more than 170 recipes, from Israel to Italy to India and beyond.”

In her four-decade career, Joan has traveled the world searching for the roots of Jewish food, testing and tasting, uncovering ingredient origins and recipes. She has visited in the homes and kitchens of Jewish communities, seeking personal stories and memories about food, tradition and family. Her research has uncovered and clarified Jewish wanderings, and showcased the diversity and rich origins of Jewish cuisine.

As in all cookbooks, the recipes are at the forefront—and the ones in this book are enticing and happily, surprisingly easily do-able. The accompanying photographs are beautiful as well. Travel the world with Joan as she shares recipes to tempt an adventurous global palate. Dishes include such traditional treasures as Yemenite Chicken Soup, Greek Bourekas, Israeli Smoky Shakshuka, Baghdadi Chicken with Rice, Roman Ricotta Cheese Torte…She presents 170 recipes – biblical, historical and global. The foods are sourced from her worldwide food journeys from India to France, from Italy to Mexico, from El Salvador to Israel and, of course, all across North America,
In addition to recipes, this cookbook offers a breathtaking Jewish culinary history. It is reflective of the work of our friend, the late Gil Marks, a noted award-winning Jewish food scholar, who we are certain would have applauded King Solomon’s Table for its personal, approachable and informative culinary narrative and its expansive historical scope. Kudos to Joan Nathan! King Solomon’s Table is a KosherEye “gift yourself and gift others” selection –an important and significant addition to any culinary library.

Try these recipes for: Hummus with Preserved Lemon and Cumin and Keftes Garaz, Syrian Meatballs with Cherries and Tamarind

If you just can't wait to see if you are the winner, you can order this cookbook online here: King Solomon's Table: A Culinary Exploration of Jewish Cooking from Around the World

Enter to Win with Rafflecopter