Back to College with Susie Fishbein! 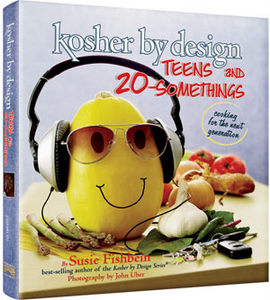 After six successful Kosher by Design series cookbooks, the energetic and creative chef–author, Susie Fishbein, has added a seventh to the series – Teens and 20-Somethings. A very interesting target audience for a cookbook; especially kosher teens and 20–somethings.As anyone who has cooked for this age group knows, they have a very select and definite opinion of what they like to eat (it doesn't necessarily have to be healthy), how (or if they are willing) to prepare it, a shortage of time they will (or can) devote to making it, and a desire for instant results.

Susie feels that the teens and 20–somethings cooking generation is underserved. Some grew up with easy access to fast food and have no desire to cook. There are some who are conscious of healthy eating and want to learn; and some who are aspiring to be gourmet cooks or cooking professionals, which are both currently trendy areas. Each of her cookbooks reflects the course of her life pattern, and lately, those of her children. So it was only natural, with several of her four children in or entering their teens, to write a cookbook that would reflect their food tastes. The cookbook is also geared to young people who "are living on their own for the first time and are becoming more responsible for their own cooking." For this book she picked some new and some traditional recipes and changed them to be funky and appealing.

We were delighted to preview advanced copies of the cookbook and wondered how Susie would reach the teens and 20–somethings who were her inspiration. How else, but to meet some of them on their own turf − the college campus. So many other people and groups have taken their messages to the campus; why not a kosher cookbook author?

The Kosher by Design – Teens and 20–Somethings, College Road Trip Cooking Demo kickoff was held at Emory University's Chabad Center, Atlanta, GA. Rabbi Shneur and Miriam Lipskier, director and program director respectively of the Emory Chabad, often have 50 − 150 students for Friday night dinner and Rebbitzen Lipskier frequently prepares recipes from Susie's cookbooks. So Emory was a perfect choice to begin her six month multi–campus cookbook and cooking demo tour (The University of Maryland is the next scheduled stop.) 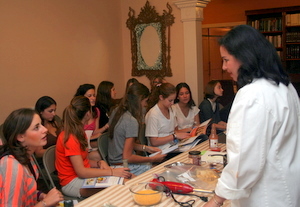 The room was packed with more than thirty Emory University teens and 20–somethings and Susie started the “pre-event” with an informal Q&A for early arrivals. She addressed one particular question that she is often asked: "what is one of the most memorable demos that you have done?" She explained that there have been several, but one that stands out the most and touched her took place in Manhattan.

After a cooking demo, she noticed two young women at the end of an autograph line. They were each saying to each other, "You tell her. No, you tell her! No, you tell her!" When they finally reached the front of the line they shared their story. Both of them were college graduates, lived on their own, had good social lives, but something was missing. They remembered attending Friday night dinners in college (Hillel or Chabad) and decided to have friends over for a Friday night dinner party. They cooked from Susie's original Kosher by Design

cookbook, which one of them had. The dinner party was a success and they continued having regular Friday night dinner “parties” which eventually became Shabbos dinners. They started seeking out what it means to have Shabbos and what it means to be Jewish. Their message to her was, "you carry a lot of things on your shoulders in doing these books, but one of the thing you carry is our souls and the fact that now we are becoming more observant Jews because we just wanted to throw a fun Friday night dinner party." Why did it touch her so?  Because, said Susie, "Judaism elevates mundane things...gives you that pause for the moment." Hopefully, she will reach many more young Jewish people through her latest cookbook.

Susie's able cooking assistant at the Emory demo, was her 16-year-old daughter Kate, who appeared to be very comfortable with food related tasks. The trip also gave Kate an opportunity to tour the Emory campus since she is starting to think about possible college choices. 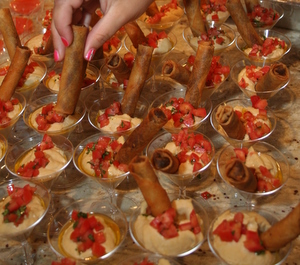 As is her practice when presenting cooking demos, Susie often mixes it up – she uses recipes from both new and previous cookbooks and this presentation was no exception. From Kosher by Design Short on Time

, she presented Creamy Chummos with Steeped Tomatoes, garnished with Vegetarian Cigars. What a perfect recipe to use as an example of delicious and healthy eating, and the difference it can make. "Why make Chummos, which is so easily available in grocery stores?", asked Susie.  The answer was simple: a product that has a long shelf life also contains preservatives or extra ingredients to keep it fresh. "The less processed foods you eat, the better off you are...foods that can be made in the home are usually healthier and better for you."

She discussed the value of Chummos as a healthy snack food, what to do with the left over lemons, (toss in garbage disposal, along with baking soda, for cleaning) variations of olive oil, (cold, first pressed gives freshest, brightest taste; varieties of olives), fried foods, (oil temperature should stay at 375 degrees; healthier to use a deep fryer as it keeps a constant temperature and food absorbs less oil), how to achieve creamier Chummos with canned chickpeas (rub off light shell covering between hands) − and so it went. Leave it to this mother of four to explain why sweets cause a "sugar crash" and that what you put into your body has a roller coaster effect.  Her advice to them, "Eat Chummos, even packaged, not M&M's!"

The next two recipes demonstrated were from the new book, Kosher By Design Teens and 20-Something,

Mexican Chicken (with hot dipping sauce) and Molten Deep-Dish Chocolate Chip Cookies; both were quick, simple and luscious choices. When preparing the Mexican Chicken, Susie stressed the importance of proper food handling techniques. There are no shortcuts; wearing disposable gloves when handling raw foods are a must!  She demonstrated the proper way to bread chicken: a wet hand (for dipping into the liquid) and a dry hand (for dipping into the breading).  How easy she made it look.

Her inspiration for Molten Deep-Dish Chocolate Chip Cookies was obvious – ever popular chocolate chip cookies! Her molten center, gooey and chocolaty, has taken the cookie to a new level and the crowd loved it.  Saturated fats, butter versus parve margarine, and the difference between light and dark brown sugars were discussed.  She stressed the importance of always using good ingredients, and for parve baking often uses Fleischmann's Unsalted Margarine sticks and Trader Joes parve chocolate chips.

Susie used a teen/20-something panel for taste testing the recipes. She explained to them that honesty was required. If, for instance, they didn’t like the recipe, they must be candid; but if they never liked mushrooms, they must disclose that fact in their critique.  According to Susie, the panelists took their responsibility very seriously, resulting in a book written for and tested by this very discerning age group.

Kosher By Design Teens and 20-Something

features 100 easy-to-prepare recipes, each accompanied by John Uher’s beautiful pictures, and the appropriate icon to designate if vegetarian, gluten-free, dairy-free, or nut-free. The introduction offers tips on menu planning and the basic kitchen equipment needed.  We feel this cookbook is beautifully done and one that we (and we certainly are not a teen or 20–somethings!) would add to our cookbook library and enjoy using. 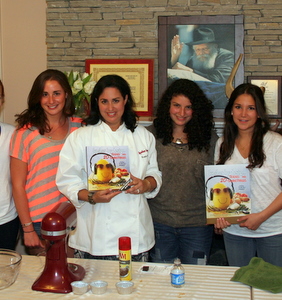 The above article was written by KosherEye.com for the inaugural publication of Kosher Inspiration Magazine – the newest publication from the Mishpacha Magazine Group.

Did You Know?
•  If Susie could pick any "Chef for a Day" venue it would be her own home with her invited guests. "My kitchen is my favorite place. Nothing makes me happier than serving people I care about."

•  Duncan Hines brownies rank as a favorite "recipe" of one of her children.

•  Susie has an MA degree in Science Education and taught in the public school system for four years.

•  Susie loves being a mom and is the parent liaison for the school choir. She enjoys Jewish music, family baseball and playing mah jongg with her girls!