The Pie and Pastry Bible 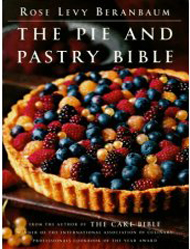 The following Pie Advice and Pie Pointers excerpts are from Rose Levy Beranbaum's cookbook, The Pie and Pastry Bible

. Great advice from an accomplished baker equals an outstanding pie!

Do not glaze the top of a pie. Although it will make the pie look shiny and very appealing, it seals in moisture and keeps the dough from breathing. It makes a tough crust. A light dusting of sugar is the one exception.

Seal the bottom crust of the pie. Rose obliterates "soggy bottom" by brushing the bottom crust with egg white, sieved preserves for extra flavor or melted chocolate for the most effective moisture-proofing of all.

For certain juicy pies (peach, nectarine-raspberry), bake the pie directly on the floor of the oven for a truly crispy bottom crust.

The food processor method for making pie crusts is the easiest. It is faster than mixing by hand, and because the dough is handled less, it keeps the ingredients more chilled.

In fruit pies, berries become bitter when cooked. The solution is to bind uncooked berries with a glaze or cook only 1/4 of the berries and the remainder uncooked.

Slice apples thinly for apple pie. Thick slices promote air space and create a gap between the fruit and the crust.

For the purest flavor in fruit pies, macerate the fruit, capture the juices, and boil and reduce the liquid. The will decrease the amount of thickener and create more intense, focused flavor and a juicy filling.

If your house is for sale, have an apple pie baking when prospective buyers tour. This will speed the sale.

One tablespoon of cider vinegar relaxes pie dough and makes it easier to roll. It will not diminish the crust's flakiness but will diminish shrinkage as it bakes.

Butter dulls the flavor of fruit (with the exception of apples). Leave all the butter in the crust when baking fruit pies.

Pointers for Success for Making Flaky Pie Crusts:
For flaky crust, ingredients must be cold to start with and stay cold.

Use the correct flour. It is practically impossible to make a flaky crust or even one that holds together using cake flour and equally difficult to make a tender crust using unbleached all-purpose or bread flour.

If using baking powder, be sure not to use SAS baking powders, which contain sodium aluminum sulfate, or the crust will have a bitter aftertaste. Use an all-phosphate product containing calcium acid phosphate, such as Rumford, available in some supermarkets and most health food stores.

If not weighing the flour, use the dip and sweep method: Lightly stir the flour, then dip the cup into the flour and sweep off the excess with a metal spatula or knife.

Brush off any excess flour on top of the dough after shaping it, as it will taste bitter after baking.

Pointers for Success for Fruit Pies:
Make the dough the day before and let it rest for 1 hour refrigerated after rolling and shaping to prevent distortion and for the best shape.

If making the pie to eat the day after baking, decrease the cornstarch by 1 teaspoon.

Use dark heavy metal, ceramic, or Pyrex pie plates for the crispest crust.

For the flakiest crust with the most attractive border, preheat the oven for at least 20 minutes before baking.

For a crisp bottom crust, try baking directly on the floor of the oven for the first 30 minutes of baking, or on an oven stone set on the bottom rack.

The pie's juices must be bubbling thickly all over to ensure that all of the cornstarch can absorb liquid and thicken the filling.

Single-crust pies need to have the edges protected from over browning after the first 15 minutes of baking; double-crust pies, after 30 minutes.

If the top of the pie is browning too much, tent it with foil, but be sure to make a steam hole in the center for moisture to escape so the crust stays crisp.

Allow the pie to cool on a rack to room temperature, or until barely warm, before slicing to ensure that the filling is set and will not run. This will take between 2 to 4 hours, depending on the thickness of the pie.

If you spray the pie pan lightly with nonstick vegetable shortening before lining it with the pastry, or if you grease and flour it, it is usually possible to slide out and unmold the whole pie after it has cooled completely. This makes cutting it easier and is better for both the knife and the pie plate! Greasing and flouring also gives a pleasant, slightly rough texture to the bottom crust.