My Search for Jewish Cooking in France 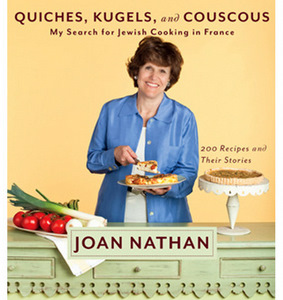 Occasionally a cookbook offers both historical perspectives along with equally exciting recipes. Yes, we use the term “exciting” because we consider each cookbook we read an adventure into culinary techniques, foods, and recipes. The new Joan Nathan cookbook Quiches, Kugels, and Couscous: My Search for Jewish Cooking in France

is one of these exceptional publications. It gives the reader both insights into the 2,000–year culinary history of Jews in France, along with many delicious and authentic French recipes – each with a kosher interpretation.

According to Joan, the title is reflective of the various Jewish influences in France.  “In weaving them together the book is a testament to the Jewish people who, despite waves of persecution, are an integral part of France today, contributing to the glory of its cuisine.”

The book is filled with an eclectic assortment of French–Jewish recipes; based on the historical Jewish European and North Africa cookery. Quiche represents mainstream France –  Dairy quiche “sans” ham and bacon is the Jewish interpretation of mainstream France. Kugel, actually means round in German, came from  the Alsace region. It is traced to the 10th or 11th century when it was used as the second dish for the Sabbath meal. It accompanied Alsatian stews. Couscous represents the North African Jews. There are currently approximately 600,000 Jews in France and half have North African roots. Couscous is a Friday night tradition with this population.

Joan spent four years of research compiling the recipes and tracing the history of French Jewish cooking. She understood from the outset that invitations to people’s homes in France would not be as forthcoming as is in America, that visiting French-Jewish homes might be a challenge. But, due to her fluency in French and her friends and relatives who live in France, she was invited into several homes, shared meals, and gathered the information for the book. According to Joan, at times she felt “like a peeping Tom” When she had a meal in homes and if she thought something was good, she requested the recipe. Most complied!

We recommend Quiches, Kugels, and Couscous: My Search for Jewish Cooking in France

not only for the delicious French recipes, but also for the fascinating and personal stories behind each. Many are heirlooms; culinary treasures passed down through the generations and shared for the very first time.

We met Joan Nathan at Kosherfest, and are providing some excerpts from our conversation:

Are there food professionals whom you admire, and who have inspired you?
There are so many: Lynne Rosetto Kasper of The Splendid Table, Marcella and Victor Hazan, award-winning authors for their groundbreaking books on Italian cuisine, Judith Jones, my editor.  (Judith Jones is the literary icon, who both rescued The Diary of Anne Frank from a rejects pile, and discovered the beloved, unforgettable, unique, Julia Childs.)  Admired Chefs also include Thomas Keller, Emeril Lagasse, Daniel Boulud, and Danny Meyer.

What is a typical dinner in your household?
On Friday nights I like to cook Jewish recipes from around the world, including cooked salads, fresh salads, and fish.

What is a favorite Kitchen gadget?
The Cuisinart food processor.

Joan Nathan is a frequent contributor to The New York Times and other publications and the author of numerous books, including two James Beard award winning publications, Jewish Cooking in America

and The New American Cooking