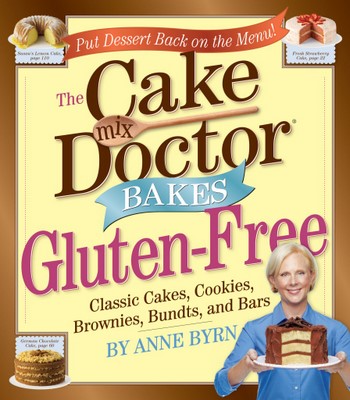 In recent years, an awareness of gluten–intolerant related health issues have been in the forefront in food trends. New gluten–free food products have emerged, food blogs and websites have appeared, and even several national restaurants have added gluten–free items to their menu selections.

What is gluten? A protein found in wheat, rye, and barley and thus, the major ingredient in baked items. It has been reported that thirty million Americans are gluten-intolerant, or have gluten sensitivity, and must eliminate gluten from their diets. Gluten has been implicated in health issues ranging from respiratory problems and abdominal discomfort to headaches, fatigue and aching joints. For those suffering from celiac disease, gluten has a disastrous effect on the digestive and intestinal systems.

Using her skill at taking a box of store purchased cake mix, adding her "magic" and creating an easy, delicious, "almost tastes from–scratch" baked goodie, Anne has entered the world of gluten–free baking. What prompted this devotee of pre–package cake mixes to tackle gluten-free baking?

" My readers pleaded with me to write a gluten-free Cake Mix Doctor! Many had baked my cakes for years until someone in their family could no longer eat gluten. For five months I baked nothing but gluten-free cakes that began with a mix. At times I felt like a mad scientist, turning a yellow cake mix into cookies, bars, even gingerbread. And when I was able to bake the Darn Good Chocolate Cake gluten-free…that was a big day! You don’t have to be gluten-free to enjoy these recipes. You just have to love cake."

As with her other recipes, it all starts with a box of cake mix – only in this case, the mix is gluten–free. The normal end result of a gluten–free cake mix does not always mirror its gluten rich cousin. Anne has tackled this issue and has artfully "Doctor"ed the cake mix as only she can. In the book, she lists what you should know about using gluten-free mixes before you start baking - very important to the success of a gluten-free recipe. Each recipe contains a note on dairy-free substitutions – a feature we especially liked for creating a parve version.

Along with a very informative and interesting introduction to gluten-free baking, Anne has created  an assortment of 76 decadent, easy–to–make desserts. Ranging from layer cakes, Bundt cakes, cookies, cupcakes, fruit crisps to a wedding cake, we are certain you will find something to bake in this cookbook.  Anne shared several of her favorite recipes:

In this age of gluten–free awareness, this is a "must have" cookbook for the gluten–intolerant baker or any baker! Thank you Anne Byrn for entering the world of gluten–free baking!

, Cupcakes: From the Cake Mix Doctor

, Chocolate from the Cake Mix Doctor

, and What Can I Bring? Cookbook (Cake Mix Doctor)