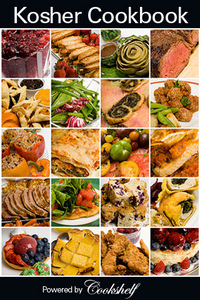 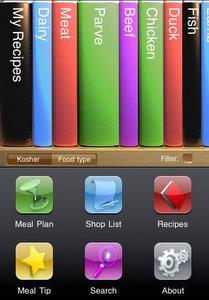 The Kosher Cookbook app is an example of a perfect "shidduch" (match). Take one talented cook/food instructor/food writer (Gloria Kobrin) and one talented techie/ entrepreneur  (Alexander Libkind) – arrange an introduction – and kosher cookbooks have gone high-tech!

Gloria Kobrin is the author of the first kosher cookbook application created for the iPhone & iPad Touch user. Appropriately titled, Kosher Cookbook, it contains over 300 recipes, cooking times, freezing information, menu suggestions, shopping lists – it is the perfect "accessory" for today's busy cook. The app is easy to use and the recipes are organized into categories, just like a printed cookbook index. With this app, the on-the-go cook can be anywhere, at any time, and have the ability to access a recipe (or an entire menu) and create a shopping list of necessary ingredients – yes, everything, everywhere there is a connection!

Gloria brings many years of culinary experience to the app. She wrote a cooking column for The Jewish Week newspaper, taught cooking classes at Yeshiva University and worked as a boutique baker, selling baked goods out of her own home kitchen.  She is an accomplished self–taught cook who, at an early age, "felt a kinship with the kitchen." Growing up, her mother did not cook and their housekeeper prepared meals using the family recipes. Kosher Cookbook is the result of a cookbook she co-wrote but never published.

KosherEye asked Gloria how she developed her recipes. "They are traditional ones from family that I have tweaked and gone over. None of them were real recipes and I just had to figure them out. I also adapted recipes, changing them for the kosher kitchen. I draw inspiration depending on what items are in the refrigerator."

We had a delightful conversation with Gloria and learned she is a very multi–talented and diverse woman. This native New Yorker is good at languages, has a BA degree in French from NYU, and translates French to English. Gloria is also a certified Family Mediator. All this, plus an interesting little know fact about her – read more of our KosherEye Chat with Gloria Kobrin.

The Kosher Cookbook app for iPhone & iPad Touch is available for $4.99 on the Kosher Cookbook website. Visit the website and see a brief demo of the features of the application. We feel this is a wonderful tool and a great gift for yourself or someone who has an iPhone or iPad – wish it was available on other platforms.

Visit Gloria on her KosherCookbook blog,