One of a Kind – Truly Original – Socially Conscious 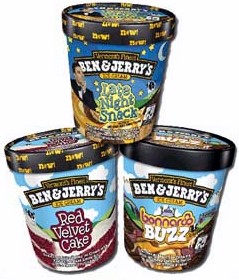 We love ice cream – a simple fact! There are many ice cream brands on the market and one of our favorites is Ben & Jerry's. The history of the company is an American Dream Success story and begins in New York in 1963 in a 7th grade gym class. That is where Ben Cohen and Jerry Springfield, founders of the company, first met.

They were running a mile and had both fallen far behind. The coach was yelling at them that if they couldn’t finish in the allotted time, they would have to do it again, to which young Ben responded “If I can’t do it the first time, I’m not going to be able to do it the second time.” The two boys became really close in high school and though they went their separate ways during their college years, they reunited in 1973.

According to the company, " They decided they wanted to go into business together, but were unsure which path was the right one to take; they narrowed it down between bagels and ice cream. When they found out how expensive bagel machinery was, the choice was simple. They spent some time researching possible locations to open their shop, with their ideal spot being a warm college town…with no competition. They soon had to remove ‘warm climate’ from their expectations because every warm college town already had an ice cream parlor. And this is when they set their sights on Burlington,Vermont, a small college town that definitely didn’t meet the ‘warm climate’ standard by any means. They split a $5 correspondence course from Penn State about ice cream making. All of the tests were open book and they passed.

On May 5, 1978, with $12,000 ($4,000 of it borrowed), they opened the first Ben and Jerry’s Scoop Shop in a refurbished gas station in downtown Burlington. They had a very successful first summer, sometimes being so popular they ran out of ice cream, but they were worried about the rough Vermont winter. They made a promise to themselves that if they were still in business after a year (and that rough winter!) they would give everyone free ice cream. A year later, they were still in business, and thus began Free Cone Day, a tradition that has been upheld every year since."  Over one million free cones are given away each year, prompting the company's ad slogan "Be One In A Million."

The creativity, and the social awareness,  of the company is evident in the names and ingredients of some of their ice cream creations:
•  Cherry Garcia: An edible tribute to guitarist Jerry Garcia & Grateful Dead fans – the first ice cream named for a rock legend. Cherry Ice Cream with Cherries & Fudge Flakes.

Both Ben and Jerry were (and still are) very socially conscious and in 1985 The Ben & Jerry's Foundation was established with a gift from Ben and Jerry to fund community–oriented projects. Today, the Foundation awards about $1.8 million annually to eligible organizations across the country and in Vermont. "Our philanthropy is employee–ed by non–management, employee advisory groups who consider proposals and recommend grants". The Foundation administers five grant programs. "Our interests are in furthering social justice, protecting the environment and supporting sustainable food systems."

In 2000, the company was acquired by the Anglo–Dutch corporation, Unilever. Ben and Jerry's Ice Cream is available globally and is Kof-K dairy kosher certified (most products). 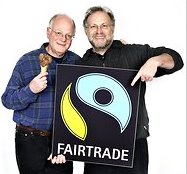 Please visit their website, Ben&Jerry's – it is fascinating to read the company timeline. We salute Ben Cohen and Jerry Springfield for their commitment to helping others; they are examples of what "giving back and getting involved" means.