Inspired by the "Everything" Bagel 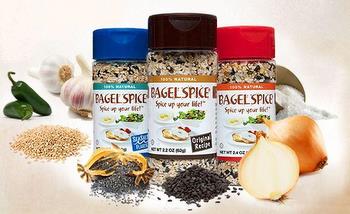 As the old adage goes – “innovation begins with inspiration”. When we discovered the Bagel Spice booth at The Fancy Food Show, this old adage came to life.

Bagel Spice owner and creator, Bechara Jaoudeh actually had his true "ah ha" inspirational moment while eating in a food court. He noticed a person who unwrapped a bagel, separated the bagel’s two halves to expose the cream cheese, and began shaking the wrapper on top of the bagel. Apparently, most of the spices that were on the outside of that person's everything bagel had fallen off inside the wrapper. He tried to get them back onto the bagel by shaking them out of the wrapper and getting them to stick to the cream cheese so they wouldn't fall off.

That was the defining moment and impetus behind Bagel Spice, a condiment initially designed specifically for bagels that people could enjoy without the frustration of having to shake the spices from inside a wrapper.

Bechara has a tremendous passion for spices and ethnic foods. Drawing on his cross–cultural palette, he created Bagel Spice to be the perfect condiment for a large variety of foods. Bechara is not only the mastermind behind Bagel Spice, but also the leader of the Bagel Spice team. He envisions Bagel Spice as a savory seasoning blend that can be added to a variety of dishes, such as hummus, spreads, salads, soft cheeses, eggs, meats, and other dishes. It is a blend of premium spices inspired by the "Everything Bagel".  All bagel spice blends are preservative and MSG free and certified kosher by Vaad Hoeir of St. Louis.

Some suggestions for using Bagel Spice:
•  Sprinkle on savory dishes and cheeses such as cream cheese, goat cheese, and hummus
•  Shake it over eggs, salmon and tuna
•  Add it to sauces, salad dressings and vinaigrettes for extra zing
•  Combine it with your favorite dry rub mixture for delicious meat dishes
•  Add it to margarine or butter to kick up the flavor a few notches

KosherEye suggests using Bagel Spice on challah. Both the original or sea salt flavor make tasty additions to bread. Shake it on just after the egg or water wash, and then bake. Bagel Spice is a young company with so many possibilities. We wish them luck in “shaking” it up.