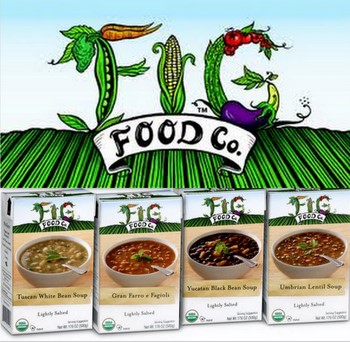 Everyone loves a good bowl of steaming hot soup − well, maybe not everyone but we certainly do! It is perfect for lunch or dinner. Of course, it is not always possible to have an abundant supply of homemade soup in the fridge or freezer. But, no worries, we have a solution – Fig Food Co. soup.

These soups are not homemade but who would know? Made from 100% plant–based, certified organic ingredients, Fig Food Co. soups are goodness in a package and taste homemade. Founder and owner, Joel Henry uses real ingredients in his soups in order to bring the most flavor to each spoonful. Sourcing ingredients primarily from North American Farms, the soups are low on sodium and offer the consumer convenient choices that are good for them. The company feels that the soups are so flavorful, that they only need perhaps, a touch of salt, and "the saltshaker rests firmly in your hands."

“The choices we made around being kosher, being organic, using a new package; it all comes from my own personal passion and wanting to leave a legacy of making the world a better place,” says Henry.Several of the soups were named for the region that inspired the recipe — Umbrian Lentil Soup, Yucatan Black Bean Soup, Gran Farro e Fagioli. “Part of making the world a better place is about reconnection; connecting to the farmer, connecting to other people,” says Henry. “I thought if we named the soups with cool names, people would explore the regions to see what they stood for.”

Fig Co. soups are available in seven yummy flavors; in ready–to–eat or condensed packages. We actually tried all seven flavors and they are delicious and taste homemade. We will admit that we did add a touch of salt to them – but that was our choice.

Their motto, "Delicious soup, good for you, good for the plant" sums it up; a very tasty, healthful, bowl of soup...and it is good for you and good for our environment. Henry feels that organic growing practices are all about a better environment.

Visit Fig Food Co. to learn more about the company. Fig Food Co. soups are available nationwide in Whole Foods, along with other mainstream supermarkets. Use the Where You Can Find Us store locator to find stores in your area. The soups are certified Wisconsin-K kosher, parve.