So Good...So Many Delicious Ways 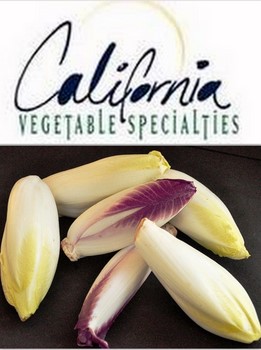 Before we extol the uses and benefits of Endive, let's clear up the correct way to pronounce its name − on-deev. Now that we have the name properly pronounced, let us share some history on this wonderful little treasure.

Endive is a member of the chicory family and is often called the queen of vegetables and is prized the world over. It has a crisp texture, and a sweet, nutty flavor with a pleasantly mild bitterness — great served raw or cooked.

When we think of endive we usually call it Belgium endive – maybe because it was discovered accidently in the winter of 1830 by a Belgian farmer. He had stored some chicory roots in his cellar−which was cool, dark, and dry−and forgot all about them. His intention was to make a coffee substitute from the roots. When he did return to his cellar the following spring, the tops of the root bulbs had sprouted tender and tasty shoots – endive. This new winter vegetable over the years gained popularity throughout Belgium, Holland and northern France.

Fast forward to California, 1978 when high school senior Richard Collins discovered endive while washing dishes at a French restaurant in Sacramento. At that time, no one in America produced endive and an entrepreneurial  idea was born. Collins did his homework and researched growing techniques, spent a year in France working on an Endive farm, and in 1983 began producing endive for commercial sale.  In 1987, along with Marc Dazbonne, a horticultural producer from France, they incorporated California Vegetable Specialties, which is now America's largest producer of endive. This winter vegetable is produced year round to the tune of four million pounds of endive each year. 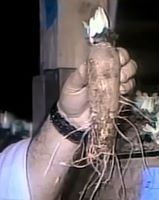 Endive are a little pricey and that could be because the growing process is complex. It is not just a matter of planting a seed and little endive grow. Yes, seeds are planted in the spring and chicory plants sprout. The leaves are topped and the chicory roots, about the size of a carrot, are harvested and placed in cold storage. When  it is time for an endive "crop", the roots are placed in growing trays and moved to dark, humid "forcing" rooms where the growing conditions are controlled. These root tops sprout a small, tight, head of endive which are them carefully picked, hand trimmed, and packed for shipping. The leaves of the endive have never been exposed to soil. Who knew that such a small vegetable has such an interesting background.

California endive are available in two varieties:
California Pearl® is the beautiful white endive which derives its creamy pale color as a result of growing in complete darkness. Its slightly bitter taste is a natural attribute of the chicory family.

Belle Rouges® is a red variety that is a cross between white endive and treviso, the red Italian chicory similar in size and shape to hearts of romaine lettuce. They are also forced in complete darkness, the red color owning to its genetic makeup.

Endive are very versatile and can be used for hors d'oeuvres, salads, hot side dishes or a component of the main dish. In addition they are extremely healthy – low in fat, sodium and calories, cholesterol free, high in complex fibers, and loaded with vitamins and minerals. Truly the "queen of vegetables."

KosherEye sampled both varieties of the California Endive and loved them!  We grilled and braised the endive and served them as a side dish with steak and chicken. We wanted to try them raw and used them in a salad that had fresh roasted beets, pecans and goat cheese – fabulous! They are also good just dressed with extra virgin olive oil, some Balsamic vinegar, sea salt and freshly ground pepper.

The following two recipes are from the Endive.com recipe library: Braised Endive with Herb Gremolata and Baked White Fish with Endive, Leeks,and Tarragon.

Watch the following videos, demonstrated by Jill Silverman Hough, for great recipe ideas and usage of the versatile California Endive.