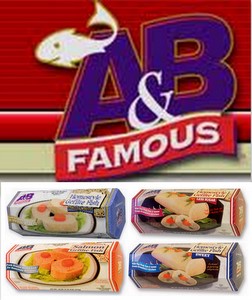 A meaningful “fish tale” as shared by A&B Famous Gefilte Fish:
“The Talmud tells a story about a poor Jew named Joseph, who despite his meager means would always try his best to honor the Sabbath. During the week, he would just get by with the bare minimum, but for Shabbos dinner, he would splurge to buy the nicest fish, whatever the cost. One Friday, the town’s fisherman had caught a whopper, for which he demanded an exorbitant sum, far above everyone else’s price range. The faithful Joseph, who always shopped for the very best for Shabbos, was the only interested customer. When he brought the fish home, his wife cut the fish open to prepare and cook it. How astounded she was to find inside a sparkling, precious gem that the fish had swallowed. Joseph and his wife were thus well rewarded for their Shabbos expense, and they lived happily ever after.”

Fish is an important part of the Shabbos and Yom Tov meal. And, for generations, gefilte fish has maintained the prized position as the star, traditional fish of choice. Its origins are said to be twofold: rooted in adherence to Jewish law, and the meager financial resources in most Jewish homes. The law of ‘borer’ prohibits separation of edible parts of an animal from the inedible, the bad from the good. The separation of fish from its bones falls into this category.  In addition, especially in generations past, anything that stretched a family’s limited resources was a plus. Gefilte, or minced ‘stuffed’ fish, utilized both the skin and the fish pieces, and stretched the budget with added stuffing ingredients such as onions, matzo, bread crumbs, etc., and adhered to Jewish law, by eliminating the need for picking out fish bones at the table. So, even poor, large, families could enjoy fish on Shabbat.

Now, how do you like your gefilte fish: sweet or peppery?  According to Michael Steinlauf, who teaches Jewish studies at Gratz College in Philadelphia, preference is based on geography and genetics. There’s a "gefilte fish line" separating the Eastern European regions, running though eastern Poland. Jews living to the west  – which includes most of Poland, Germany and Western Europe − ate the sweet gefilte fish. Those to the east − Lithuania, Latvia and Russia − ate the peppery version.

As centuries passed, that beloved gefilte fish remained front and center, but evolved; Jewish families primarily stopped stuffing fish and, since the 19th century, the skin has commonly been omitted − instead the seasoned fish is formed into patties or balls.

Homemade gefilte fish is time consuming, but worth the effort, especially when using a family heirloom recipe which pleases the palate and the soul. But consumers have a choice – delicious frozen loaves of “homemade” gefilte fish, ready to pop in the oven or boil in the pot without any fuss or messy, intensive, time consuming preparation. We are referring to A&B Famous fish. Frozen fish loaves such as A&B are a perfect substitute for made–from–scratch gefilte fish. It provides a convenient alternative to homemade. In fact, many cannot tell the difference and we know that from personal experience!

A&B Famous takes pride in their products. The company, launched in the 1970’s, has expanded to provide several types of frozen fish loaves. They use only premium quality fish pieces, which are seasoned, prepared and processed without fillers or chemicals, and then shaped into loaves and frozen. The Gourmet Passover collection offers 5 varieties, from classic sweet to sugar free. Convenience is at the forefront! Simply, unwrap, immerse the frozen loaves in water, and the fish can be baked/cooked/ boiled and ready in slightly more than one-hour. A&B is packaged in ecologically friendly cardboard boxes, and processed in technologically advanced facilities; packaging comes with cooking directions, as well as several recipes .The company is proud to share that In blind tastings, A&B Famous products have been consistent winners.

A&B kosher for Passover gefilte fish is available nationwide in many supermarkets,or contact the company: 1-888-425-4101. Visit them online at GefilteFish.com.