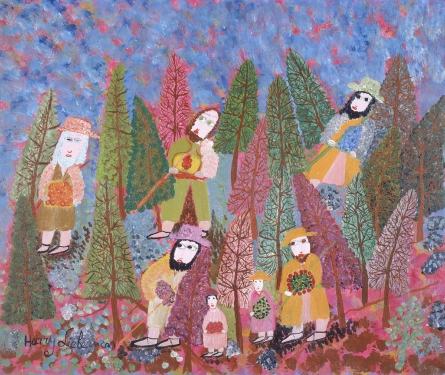 In many households, it is customary to eat a dairy meal at least once during Shavuot. There are varying opinions as to why this is done. Some say it is a reminder of the promise regarding the land of Israel, a land flowing with "milk and honey." According to another view, it is because our ancestors had just received the Torah (and the dietary laws therein), and did not have both meat and dairy dishes available.

KosherEye does include dairy products in our meals for the celebration of Shavuot, and in particular, cheese. Actually, we are cheese lovers! Such cheese lovers in fact, we decided to revisit our KosherEye cheese article, Ten for 10...ten to taste in 2010, Say Kosher Cheese! The following ten are some of our favorite kosher cheeses.

May your Shavuos table be filled with milk and honey, and the blessings of Torah learning, dear family and friends.

More information:
The painting Shavuot — The Harvest represents the festival that marked the beginning of the wheat harvest and commemorates the bringing of offerings to the Temple in Jerusalem and the giving of the Torah at Sinai. Attesting to Lieberman's Hasidic heritage, the work is filled with Kabbalistic symbolism such as the triangular form of the trees that denote the ten sefirot, or emanations, emerging from God.

Born in Poland, Lieberman emigrated to the Unites States in 1906. His twenty-seven year career as a naive artist began at the age of 76.