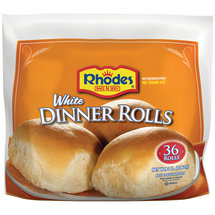 Herbert Cecil Rhodes Jr., one of eight children, was born near Sheffield in Derbyshire County, England, in February, 1896. He started working at the age of eight selling bread after school and on Saturdays−a pound loaf for three pennies. When young Herbert was 11, the family moved to British Columbia. In the ensuing years he began his own printing business, started an oil well, married Edythe Andrews, moved to Portland, Oregon and invented a part for the Model T Ford! Whew! We would call that entrepreneurial.

In 1929, Herb assisted in perfecting the automatic-roll machine, and in 1932 founded Rhodes Bakery Equipment, Inc., which sold products nationwide and revolutionized the baking industry. For a period of time, 80% of all bread made in the United States and Canada was produced under his patents. He even created machinery to automate the cookie industry.

Ken Farnsworth Sr., a food broker, saw the potential of Rhodes Bake-N-Serv  to grocery stores. Under his leadership, dinner rolls were added to the Rhodes line and were successfully introduced to food service and grocery stores. His eldest son, Ken Jr. also joined the company.

Rhodes Bake-N-Serv, part of Rhodes International, is now owned by Ken Farnsworth Jr. and run by Ken and his eldest son Kenny, who is President.

The convenience of Rhodes products is unmatched−they are fun to make, easy, delicious and kosher! We baked with both white and whole-wheat loaves; and white rolls.

So what can you do with Rhodes Bake ‘n Serv? Basically anything!

We have been fans of the product for many years, but really began rolling in the dough to write this feature.

Basically, you can be a “minimalist”! Open the package; plop the frozen rolls on a baking sheet; cover them with an oil-sprayed piece of plastic wrap and ignore them for 6 hours! Pre-heat the oven and bake for 20-30 minutes (directions are on the package). So EZ!

Now here are some other ideas which we love!

We rolled the frozen dough rolls in garlic butter – actually we used a mixture of parve and melted Earth Balance margarine and finely minced garlic. Then we let them rise and bake. Such scrumptious garlic rolls!

We sprayed a 10-inch round pan with oil –  placed 12 rolls in the pan – covered them with an oil-sprayed piece of plastic wrap and let them rise; brushed on a room temperature beaten egg yolk and baked them. A delicious pull-a-part challah.

We covered frozen loaves with a spray of olive oil, a sprinkle of crushed rosemary and Herbs de Provence – let them rise – and we had a crusty loaf of European type bread! We thought about adding black olives. Maybe next time!

Try these yummy Orange Knots and Lemon Pull-Aparts recipes.  No one would know you took a short-cut and used frozen dinner rolls.

So, as you can see, Rhodes fills a need when time is of the essence and also when you just want some easy bread or rolls! Some would call it  “cheater” bread. We call it a delicious staple for the kosher kitchen! You simply "knead" to share your Rhodes secrets with us! To see all of Rhodes OU kosher certified products, visit OU kosher certified product listing. Enter Rhodes Bake-N-Serv in the Brand search box.

Visit RhodesBread.com for product information, recipes and to locate a store in your area that sells these wonderful products.