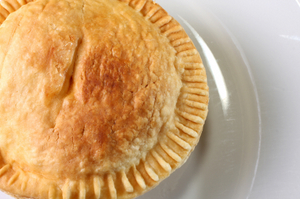 “Four and twenty black birds baked in a pie
When the pie was open, the birds began to sing
What a lovely dainty dish to set before the king… ”

What is a Savory Pie?

According to Wikipedia, “A pie is a baked dish which is usually made of a pastry dough casing that covers or completely contains a filling of various sweet or savory ingredients.” Its origins are quite ancient, but can even be traced to 1304 BCE, as evidenced on the tomb walls of Pharoah Ramses II where there seems to be evidence of honey wrapped in a crust of oats, wheat, rye and barley.

The pie evolved as it filled a need for nutritious, easy-to-store, easy-to-carry, and long-lasting food on long journeys, especially at sea. An early reference to "pyes" as food items appeared in England as early as the 12th century. History tells us that at the coronation of eight-year old King Henry VI of England, in 1429, songbirds were considered a delicacy. Pie was served, consisting of cooked peacock mounted in its skin on a peacock filled pie. In later years this tradition was adapted to topping a savory pie with a porcelain bird ornament to help with the release of steam and identify a good pie.

The Pilgrims and early settlers brought pie recipes with them to America, adapting to the New World. Their first pies were based on berries and fruits, from knowledge shared by Native North Americans. As America became a melting pot to the world, savory pies proliferated: Meat pies with fillings such as steak, chicken, potatoes and mushrooms; Potpies with flaky crusts and bottoms − typically with a filling of meat such as beef, chicken, turkey, gravy, carrots and peas, and cheese pies, popularly known as quiche.

Most savory pies can be frozen, making them convenient make-ahead meals. Crusts can be homemade or purchased (we like parve Wholly Wholesome crusts) and fillings can be as simple or as complex as one wishes.  Best of all, savory pies can be the entire meal – offering a combination of carbohydrate, vegetable and protein in every single bite.

We are providing a few of our favorites, but certainly would enjoy your sharing yours with us. In our 2011 KosherEye Food Forecast (LINK), the experts predicted that pies would be one of the year’s most popular trends!