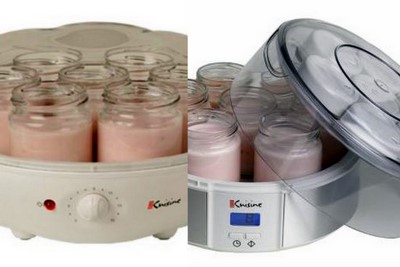 Yogurt is a staple in our refrigerator, and a very healthy and important part of our diet. Its benefits are so numerous, that it would require another article just to write about them. The dairy section of most grocery and specialty food stores devote large areas to yogurt choices; there is something for everyone.

Very simply stated, yogurt is made from milk (most commonly) to which yogurt culture (bacteria) is added, which in turn causes fermentation of the milk and produces a product that is both tangy and thick.

Yogurt was not always available in today's eye catching containers and in such an array of assorted flavors, low–fat, non–fat, whole milk options, fruit added, non-dairy, etc. etc.  This product has a long history. As far back as 2000 BCE there is evidence of cultured milk products. The records of the ancient cultures of Iran and India mention yogurt by 500BCE and state that the combination of yogurt and honey is called  "the food of the gods" and Persian tradition holds that "Abraham owed his fecundity and longevity to the regular ingestion of yogurt." (Wikipedia)

Yogurt was a diet staple in Europe, the Russian Empire, Asia, and India long before it was introduced into the United States in the very early 1900s. At that time it was mainly used for digestive purposes and for home culturing (they made their own.) Leave it to the ingenuity of two Armenian immigrants who started a creamery business in Andover, Massachusetts in 1929 and delivered yogurt around New England in a horse–drawn carriage. Over the years yogurt has gained popularity as a healthful addition to the American diet

Both models make seven 6–ounce jars of yogurt. Using fresh pasteurized milk, whole, skimmed or semi–skimmed, the milk is heated on the stove and the yogurt starter culture is added. The culture is not included with the yogurt maker and is not kosher certified. Directions for making the yogurt, using store purchased plain yogurt are included and that is the route we took. Once the mixture is prepared, we poured it into the glass jars, placed them in the base of the machine, put on the cover, selected the time, started the machine and presto, in about seven to 12 hours (depending on the type of milk used) you will have created the most delicious, creamy, tangy yogurt. We loved it.

There are recipes included in the direction booklet for adding preserved fruit, jam, jelly, syrup, fresh fruit, and coffee to the mixture. We decided to make unflavored yogurt so that the true flavor of the finished product would be noticeable. The verdict? Wonderful! We had our first taste straight from the jar and it passed with flying colors. We then proceeded to have it for breakfast and placed it over sliced bananas, strawberries, and topped with a crunchy wheat/pecan cereal. Yummy! Would we make it again? Absolutely! From now on, we will add homemade yogurt to our regular recipes.

There are several differences between both models: The MXY650 lids for the glass jars have a number calendar allowing you to set either the date made or the expiration date (10 days). Both models have automatic shut-off timers to indicate when the cooking cycle is complete but the MXY650 model has an LED digital timer display and beeps when the cooking cycle is complete.

What a great Hanukkah gift for the foodie who has everything!

For more information on the yogurt makers and Euro Cuisine products, visit their website, eurocuisine.net.