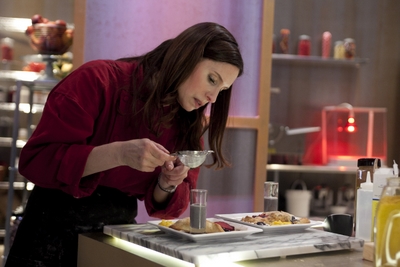 In September, The Food Network premiered a new cooking show, Sweet Genius, with master pastry chef Ron Ben–Israel as host and judge. There are eight original episodes, each featuring four pastry chefs who vie for a $10,000 cash prize. The chefs are challenged to create three magical and inventive desserts.  Each creation is inspired by mandatory ingredients, a secret ingredient, or a theme. And of course there is a time constraint.  After each challenge, Ben-Israel critiques each chef's creation and eliminates one chef until there are two chefs left to compete in the third pastry challenge. The winner of the third challenge takes home the cash prize.

How delighted KosherEye was to discover that our friend Paula Shoyer—pastry chef, cookbook author, cooking instructor— was a contestant. We contacted Paula and wanted to know about her experience as a reality show contestant on national TV and having millions of viewers watch her.  Because our interview was prior to the airing of Paula's episode, there were several stipulations attached to the interview: among other things, Paula was not allowed to reveal the winner of the episode or specific show related information. A representative of The Food Network arranged the interview and was on the phone with us. No, sorry, we didn’t get a hint of the winner, and actually enjoyed “meeting” Food Network representative Dana Steere.

Paula's episode, Disco Genius, airs on Thursday, October 27th 10:00 PM ET/PT. The details of this sweet episode, as featured on the The Food Network are: 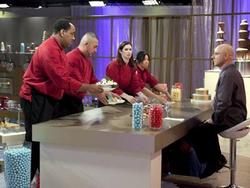 "Relax! A very Zen object of inspiration takes the spotlight in the first test. But can it calm the nerves of the four aspiring geniuses, who must make fabulous frozen desserts using jelly beans and hot sauce? Then when the second test gets underway, the competition gets stinky. The chefs try not to let a foul-smelling fruit distract them from their singular goal of creating desserts inspired by a fabled one-horned creature. Then for the final test, '70s fever takes over! With a disco ball as inspiration and carbonated candies as a mandatory ingredient, the final two chefs must rock out delicious desserts if they want to secure the Sweet Genius title and the $10,000 prize."

KosherEye's Interview with Paula Shoyer:
How did you know about the show and what was the process behind you being selected as one of the contestants?
Several people told me that I should try out for TV food competition shows, so for the past several years I started applying and my name was added to possible lists.  I even auditioned for Food TV's The Next Food Network Star and although I was not selected, I found the experience entertaining! And then, last Passover, while we were in Florida, I received an email – a casting call for a pastry competition, so I sent in an application.

I was called for a live audition in NY and it did not include any cooking. It was just to determine how I looked on camera. They asked me why I should be on the show. I told them they needed some older contestants, people with special diet skills, someone who switched careers (I was a lawyer). Most people who appear on competition shows looked bad and I told them they needed more glamour.

They responded by phone and told me that I needed to be in NY for the show. I thought that they wanted another audition, but I found out I was actually selected to be on the show!

Each chef brings their own style of baking/cooking to a show – what would you consider yours?
My style is creating dairy–free parve desserts. I create desserts for special diets. I believe that EVERYONE deserves dessert!  For the show, I did use my background in French training, and worked with cream and butter in the desserts.

Baking is an exact science –  were you able to have notes or did you just know the recipes by heart?
The recipes had to be in my head – no notes allowed! So I just concentrated on some basic recipes.

Did the show's producers give the contestants an inkling of the secret ingredient just prior to the start of each segment?
NO! The Secret ingredient was presented as they taped the show. The products come in on a conveyor belt. 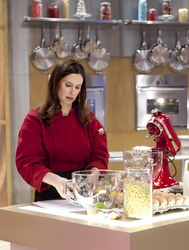 What was the time frame for shooting your segment?
The show was taped in one day. We started shooting at 6:30 am and continued until we finished. They feed us well during taping.  They do not provide a professional makeup staff – no limo – no car service. I was responsible for my own transportation to the show (that morning) and I had hired someone to professionally apply my make–up. I didn't worry about my hair because it had to be away from the food.

What was the experience like?
I felt privileged to be there. I wanted to enjoy it and get whatever I could from the experience. It was exciting, fun, and hard. I figured out everything on the fly. I really am a home baker. The kitchen on the set was fabulous!

What was it like to be judged by Ron Ben–Israel?
He is tough. He is a master of fondant so I did not want to create anything with fondant!

KosherEye looks forward to watching Paula compete and can't wait to find out who won the $10,000! Paula promised to give us more answers after the show airs – we will update this feature.

Paula told us, "This has been an exciting year promoting my book, The Kosher Baker, and publicizing kosher to millions on TV."

Good Luck Paula – we are cheering for you!