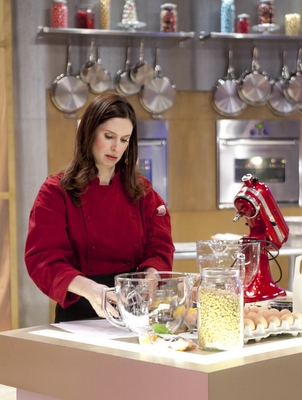 When we first interviewed Paula Shoyer, author of The Kosher Baker

and recent reality star of The Food Network's new show, Sweet Genius – Disco Genius episode – she was not able to reveal any details of the actual competition prior to the show being aired. The show was aired on October 27th and we watched Paula and three other contestants compete for the title of Sweet Genius and a $10,000 prize.

There were three elimination categories: Frozen Desserts, Baked Desserts, and Chocolate Desserts.  Each category consisted of an inspiration item, and up to three mandatory items with several of them being introduced after the baking started. The chefs do not know what the item is until it appears on a conveyor belt, complete with blinking colored lights.

Would our gal make it to the finals? We spoke with Paula the morning after the show aired and the following are excerpts from our conversation.

When was the segment, Disco Genius, filmed?
Our episode was filmed on July 5th. It was the first episode of Sweet Genius ever taped.

We can't imagine how you were able to keep so calm when the pressure must have been tremendous. So what was it really like?
It was stressful but fun. They have a fabulous kitchen – I loved it, it was beautiful! I didn't expect it to look like this.  I thought it would be more like the Chopped set but it looked like the Iron Chef set. It was the coolest place I have ever worked in professionally. It was hard to find the equipment and ingredients and get the equipment to work, but I wanted to enjoy myself and I did.

Were the stations stocked with the staples – flour, sugar, butter, eggs, etc. – or did you have to get every item yourself?
No, we had to get everything – they have bags and bags of ingredients. You had to bring a bowl and scoop the flour and sugar needed for the recipe. I had an idea in my head of what I needed but didn't know if they had it. For the first category, I found a mango and was going to use it for my sorbet. But I found that it really wasn't good and wouldn't make a flavorful sorbet, so I went back and found raspberries. You have to do everything on the fly.

Did you have a master plan in your mind as to how you would face each challenge? The time limitation must eliminate many of your recipes.
I had in my head a couple of basic recipes that I would vary a number of ways. I make sponge cakes all the time. I just needed to add different textures and colors, a sauce, decoration, creams and crunch. With the time constraints, I knew right away that I would make something that bakes quickly –such as cookie dough tart crust – baking time is incorporated into the total time.

The first challenge, creating a frozen dessert, used a Bonsai tree as inspiration and jelly beans as a mandatory ingredient.  You appeared calm when another mandatory item, hot sauce, magically arrived on the conveyor belt.  How did it affect your original recipe concept? We thought your creation was very original: Rosemary Lemon Sponge Cake layered with Raspberry Sorbet, Rosemary Ginger Ice Cream and Carmel sauce.
When I saw the Bonsai Tree I immediately knew I would use herbs. I prepared for the show and thought about different categories of ingredients – candy snack food, potato chip crust, etc.–  and thought about many ingredients and watched a lot of (cooking) shows. The secret ingredient needs to be incorporated into the recipe and not just placed on the plate. I am not a candy person and know that I  would grind up the jelly beans and use them for color.

The Rosemary Lemon Sponge Cake is in my book. I wanted to make some kind of nut candy bark or white chocolate to put on top but never got to it because I was so busy with the frozen elements. There is a time constraint, 40 minutes for this category, and that includes doing everything. I was so busy I forgot to plate the ice cream. Everyone's frozen elements melted because of the lights and  the time it took to present the plates,  so  Chef Ron Ben-Israel judged that round on flavor.

Note: Paula was not flustered when the hot sauce was introduced and just proceeded to make a caramel sauce and added the hot sauce to it. That's our gal!

How did you feel when the first elimination name was announced and it wasn't yours?
I was so happy and relieved. I was having so much fun  and wanted to do more and better. I wasn't ready to go. I really wanted to keep going – it was just a great adventure!

The second challenge was to create a baked dessert, which is your area of expertise. The inspiration was a Unicorn and the mandatory ingredient was an Ostrich egg.  After baking started, they added two additional mandatory ingredients, Durian Fruit and curry powder. We thought that you were a "Sweet Genius" with your interpretation of the ingredients:  An opened face Fruit (plums  and raspberries ) Galette Tart shaped like the horn of a unicorn, with lemon curd and blueberry sauce.

We were very surprised that you were eliminated with this challenge and thought that you would proceed to the final challenge. How did you feel when Chef Ron Ben-Israel announced your name?
I was surprised. I felt that I had represented the inspiration. The unicorn is whimsical and I imagined beautiful pictures in a story book with all the colors and that was how I interrupted it. I was really sad to have  to leave at his point because I love to prepare chocolate desserts.

Note: We do agree that the unicorn invokes images.

Given what you now know, would you do anything differently the next time you are selected to appear on a reality cooking show and would you do it again?
Would I do it again? Yes! Now that I know what the show is about, I would be better prepared. I learned so much and would use what I learned.

Chef Mauricio  won the Sweet Genius challenge.  What do you think of his creations?
I was extremely impressed with his talents as a pastry chef and felt that he showed great skill. His creations were visually stunning - just beautiful!

For us, Paula Shoyer is a Sweet Genius – she displayed creativity, responded well under pressure and was glamorous!