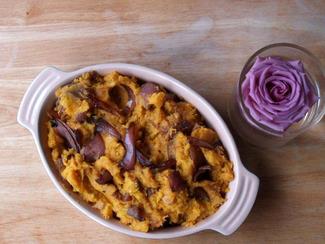 My grandmother – the one on my father's side – was a school teacher. Kindergarten in fact. She had a smile and something nice to say to everyone. She kept cookies in her car to give to toll collectors. She couldn't sit in a restaurant without engaging the baby at the next table. She kept a list next to her kitchen phone of birthdays and anniversaries. Every time she took the train down to visit us from Philadelphia, she would collect piles of paper Amtrak conductor hats for us (and her students). One of my favorite memories is her wearing one of those conductor hats and leading all of the grandchildren in a parade around the island in my aunt's kitchen. Well, she was the caboose, but conductor nonetheless.

Before she and my grandfather passed away, we had Thanksgiving at their house every year. I loved that house. The first floor formed a circle around the stairwell. I used to follow that circuit like it was a train track and I was the engine. The front door opened into the living room with its fireplace and potbelly stove.

Thanksgiving was a family affair on par with Pesach. But with bread and no long prelude to dinner. Food and family was the event. And Bubbie reigned over it. You could say she was the train conductor.  At least she had the hat for it.

She directed my dad to add the leaf to the dining room table. Then we added another table. Every once in a while we added a third.

She directed me to set each place with a dinner and salad plate, two forks, two spoons, one knife, two glasses, and a napkin in a napkin ring.  There were always napkin rings. She always had to remind me to put the napkins on the left next to the forks. Because I always forgot and put them on the right. Sometimes I still do.

She directed my mother to add fresh dill to the chicken soup. My uncle Michael to stud the sweet potatoes with marshmallows. My aunt Leslie, whom I call Sessie, to cut the vegetables. My aunt Linda to entertain me with stories of when I was younger,

And then the guests arrived. The first was always Bubbie's brother Sidney who walked in with the tell-tale click–clicking of a box of mints in his shirt pocket and a still dripping bucket of pickles and olives plucked from the barrel at his favorite pickler. He always had a fresh twenty for each of the kids.

Before the parade of dishes, we would pour the wine, and say shehecheyanu – a prayer of thanks for bringing the whole family together to her table.

Dinner started – Soup. And then turkey filled with stuffing. Cranberry sauce from a can with mandarin oranges. Salad. Green beans. Roasted potatoes. And those sweet potatoes.

When Bubbie passed away, we transferred her china and silver to Sessie's nearby house, including the special egg dishes for Passover.

The menu revolves around Bubbie's, but we've made a few tweaks. We buy dense breads made with pumpkin, or cranberries, or whole wheat and walnuts. We've tried fresh cranberry sauce. One year Sessie made a cornbread stuffing. Fancy desserts.

This year, I’m helping to plan the menu. After a several year hiatus from the table, I've asked my mom to bring her chocolate chip pound cake*. I'm going to make Roasted Butternut Squash with Caramelized Onions. I'm sure someone will still want marshmallow–studded sweet potatoes. 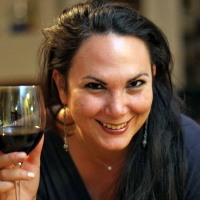 Gayle Squires, who often goes by her Hebrew name Zahavah, writes the food blog KosherCamembert.com from her home in Cambridge, MA. When she gets home from long days as a health care executive, she delights in cooking up her favorite foods and sharing them with friends and family. A self–taught cook, Gayle voraciously reads cookbooks like novels. Her own recipes are inspired by local and international travel, and she has developed or adapted recipes from as close as Maine and as far away as Panama, Spain, Egypt, and South Africa. Gayle is particularly fond of French, Middle Eastern, and North African food. Here next stop –hopefully somewhere in South America. One of her favorite meals is an over easy egg on toast, topped with good old American cheese.

*We will post the recipe when Gayle's mom finds it! SHE FOUIND IT! Enjoy Chocolate Chip Pound Cake.