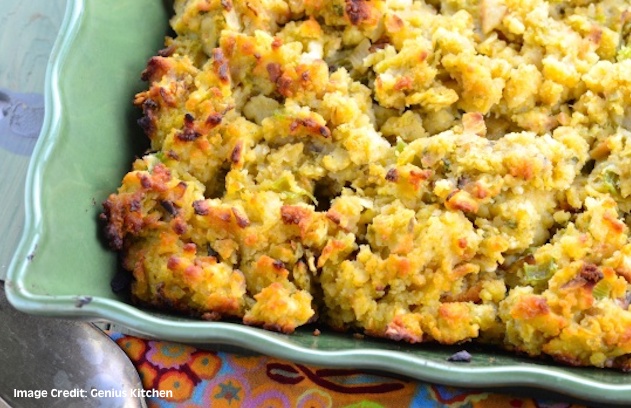 Famous pairs: Adam and Eve, Ben and Jerry, Bert and Ernie, Batman & Robin, wine and cheese, corned beef and rye…and of course, turkey and stuffing.  At Thanksgiving, most Americans consider the stuffing just as important as the turkey!  Some call it dressing; some put it inside the turkey and some serve it on the side. Stuffing can be fruity, savory, made of rice, farfel, matzoh meal, cornbread, bread crumbs, quinoa and more. It can be parve, meat, or even gluten-free. Many stuffing recipes are family heirlooms, passed down from a grandmother’s or bubbie’s kitchen, or can be simply made from a convenient stuffing mix. We are presenting some of our favorites, including some packaged choices. Enjoy!  ... And by the way, do send us a recipe for your favorite stuffing. Thankgiving Day is November 28!  Gobble, Gobble!

Packaged Stuffing:
Arrowhead Mills has offered the kosher consumer an excellent ready to cook stuffing mix. Recipes are right on the package or create your own using this easy beginning. The mix is available at most Whole Food Markets.  The Organic Savory Herb Stuffing Mix is a light, fluffy, blend of organic wheat  and seasonings including sage, thyme and rosemary. It can be prepared on the stove top or inside a turkey—just add water or Broth, olive oil and optional kosher sausage, chestnuts or celery. This mix calls for simplicity or creativity.

Arnold offers five varieties of premium stuffing mixes: cornbread, herb, sage and onion, seasoned and unseasoned –  all are OU certified, kosher parve.
These stuffing mixes are available at most Wal-Mart’s and mainstream retailers.