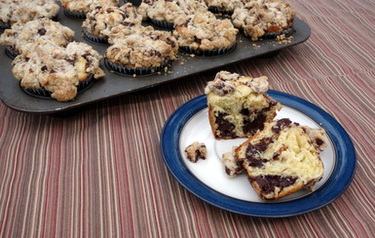 We had so many wonderful recipes entered into our Red Star Platinum Yeast Sampling/Baking Contest. As we previously posted, three recipes were selected by Red Star as the top winning entries:

KosherEye considered everyone's recipe a winner −  they were creative, looked delicious, sounded good, and it was obvious to us that each participant put a great deal of time and effort into their recipes. So, as we promised, we are sharing several of the recipes. Please try them and share your opinions with us.

Not Your Bubbie's Chocolate Babka by Amy Siegel: This recipe caught our "eye" because of the unique way that the babka is formed;  like a jelly roll but with a twist.

Cranberry Challah by Susan Rhine: We liked the addition of cranberries in this recipe. They are added during the forming of the challah strands.

CinnaYUM Cheese Buns with Caramel Crumb Topping by Leta Borck:- What could be better than a cinnamon bun? A cinnamon bun with caramel sauce!

Easy Cinnamon Raisin Bread by Judith Shoobe:  Made with coconut milk and Earth Balance Organics Coconut Spread, this nondairy recipe appealed to us.

Never–last Cinnamon Roll Cake by Debbie Lowenstein:  Made with soy milk or apple juice, this is a great recipe that makes three cakes - actually, they look like cinnamon rolls to us. Using nondairy margarine, this recipe can also be parve.