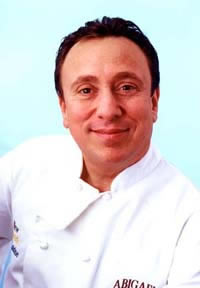 , is consultant to The Hain Celestial group and Royal Wine Corporation and is executive chef of The Abigael Group, owner of the acclaimed Abigael’s restaurant! Chef Jeff has cooked at the James Beard House in New York, been guest chef at the prestigious De Gustibus cooking school at Macy’s and made frequent appearances on TV shows with Regis, Joan, Roseanne, Conan to name just a few.  And, you may have caught his Matzoh Ball Soup Challenge victory on the Food Network (we did!), where he won the Throwdown against Bobby Flay. (Sorry Bobby, it was NO CONTEST, skill and genes!)  Wow, one can say Chef Jeff multi-tasks!

So who is Chef Jeffrey Nathan? A hint of Nathan’s talents first emerged in his grandmother’s kitchen.  At family gatherings, while all the men and boys watched TV and snacked, young Jeff headed to the kitchen to assist the women. Upon graduation from high school, he enlisted in the Navy, and was initially assigned to be a missile technician.  He realized that this was not going to be his future, and he requested a re-assignment to the kitchen. He excelled as a cook and quickly became the captain’s cook, preparing food for the officers as well as diplomats throughout the world. Upon discharge, he attended and graduated from the world famous Culinary Institute of America (CIA).

Combining entrepreneurial and culinary expertise, Nathan owned several successful non-kosher restaurants in the New York area.  He, along with a business partner, purchased restaurants that had gone into Chapter 11 bankruptcy and turned them around.   After 10 years of experience in successful restaurant “turnarounds” and ignoring the advice of several friends and business associates, Nathan purchased a financially stressed kosher restaurant and created Abigael’s.  It is from this point that his successful kosher story begins, and Jeff’s life evolved.

Abigael’s is a leading New York restaurant, featuring contemporary American food with a global influence. In a conversation with Jeff, he emphasized that Abigael’s is meant to be a great restaurant and just happens to be kosher.

Behind the scenes of the Nathan enterprise is Alison Nathan, Jeff’s talented wife, who is also a food professional. She graduated from Johnson and Wales Culinary School, and met Jeff when she was his employee.  They have two children. Alison takes charge of the administration and public relations of the company and is very involved in all business projects.

Over the years Chef Nathan has pursued an in-depth education about kosher production and kosher availability.  He has been instrumental in widening the selection and availability of kosher gourmet ingredients.

KosherEye is honored and excited to have Chef Jeff as guest co-host at our upcoming Twitter Party. Don’t miss this event, Monday, March 15th from 8:00 - 9:30 PM, EST. To follow the Tweets and participate, use the tag #Passoverpty. We will be “chatting” about Passover tips, recipes, ingredients, menus, Abigael’s restaurant and Passover friendly recipes from Jeff’s books.

It’s mouthwatering--take a look at a few selections from the Passover Seder and Passover dinner menus at Abigael’s on Broadway --award winning chicken soup, char-grilled rib steak, chicken rouladen, herb crusted salmon, triple strawberry shortcake, brownies layered with chocolate cream and ganache.We can hardly resist the flight to NY. Believe It or Not, Abigael’s will do “to go Passover dinners”, but how far????