Recipes your family will enjoy...Stories they will NEVER FORGET 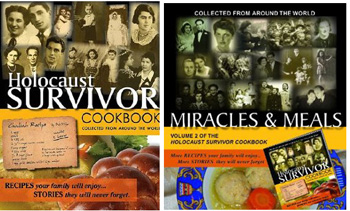 The two cookbooks "The Holocaust Survivor Cookbook" and its sequel "Miracles & Meals" are labors of love, providing food for both body and soul. Each recipe on these pages is accompanied by a personal story of the Holocaust – of courage, loss, suffering, love, support, caring, life, death and miracles of survival. The book shares photos of Holocaust victims and survivors, along with their recipes and memories. The Caras family lovingly collected each of the stories from around the world.

Sometimes an average day can be life changing. Joanne Caras' mission began one day in Jerusalem when she visited Carmei Ha'Ir, an "open restaurant", a soup kitchen where her son and his wife volunteered. In this open restaurant, the policy is to not differentiate those receiving free meals from people like Caras and her family who paid for their meals. Joanne Caras was moved by the dignity with which each meal was served and knew she wanted to raise money for the cause.

And so her quest began, the global Holocaust Project. She searched the globe for Holocaust survivor stories and recipes. It was difficult going at first, as are many worthwhile pursuits. Stories and recipes finally arrived from locations worldwide. Enough so that she could create her first book, "The Holocaust Survivor Cookbook", and now volume two: "Miracles & Meals".
Both books include hundreds of photos, recipes and miraculous stories of survival. Some survivors shared stories they have never told to another living soul, Caras hopes that these stories will be shared at the family dinner table, when the recipes are served. Sales from both books benefit Carmel Ha'ir.

To share her mission, Joanne Caras travels the world (Over 250 speaking engagements since publication) to share stories and insights about the books. Her goal is to sell 6 million cookbooks as a tribute to the memory of those 6 million Jews who did not survive the Holocaust. It honors all survivors and keeps their stories alive for generations to come. She also wants to raise millions more for Jewish groups all over the world. Jewish groups such as Hadassah, ORT, Synagogues, schools, JCC's, Holocaust Museums, and Jewish Federations are purchasing the cookbook at wholesale and selling them as fundraisers. Both cookbooks are available to be downloaded as e-books as well. The cookbooks are also currently in use to teach Holocaust Studies in public schools. We congratulate Joanne on reaching a milestone - over a million dollars has been raised for charities from the sale of these two amazing cookbooks.

Buy the books: This is a "gift yourself, gift others, gift everyone" KosherEye selection. We can't think of a better hostess gift, birthday gift or holiday gift. For generations to come, every story, every memory, every recipe, every picture in these books will help to ensure that the world remembers.  (Books are $36 each) and can be ordered from survivorcookbook.org.

KosherEye notes: Since several of the recipes may be recorded from recollections, a few are not as detailed as some cooks may require. KosherEye is always here to help!
Below are several excerpts of stories and recipes:

My name is Lillian Berliner and I was deported with my family from Hungary in 1944. My mother and I survived Auschwitz, and labor camps in Bremen and Bergen-Belsen. We were liberated by the British troops on April 15, 1945.

Most of my family was deported from Hungary and the majority perished in the Auschwitz gas chambers. Miraculously my mother (in her early 40's) and I survived together. We were never separated.

We were starved in Auschwitz, and to alleviate our numerous hunger pains, we invented frequent "dream meals" ranging between coffee klatches, luncheons, informal and formal dinner parties. We planned our menus carefully for hours and in great detail. Our favorite dishes and dessert took priority and were frequently repeated. The table settings, the color of dishes, tablecloths, napkins, flowers for each occasion and the seating arrangements were also discussed. This may sound delusional I know, but during these meal planning sessions, we were briefly transported to a normal world, a world that was so far from our miserable reality. We actually "tasted" the dishes we prepared and our hunger pangs disappeared during the hours of planning. We could hardly wait for the next planning session.
There was no need or time to plan "dream meals" in Bremen labor camp thanks to the kindness of an old Danish retired seaman, who gave us his daily sandwich and to a French prisoner of war who shared his Red Cross packages with us. In Bergen-Belsen we were too sick and weak to even dream. The recipe I have included was always on our menus and were native to my hometown of Kolozsvar, Hungary on the Romanian border in Transylvania.

My grandfather, Moishe Perlman was in the concentration camp, Plaszow, for most of the Holocaust. Plaszow did not tattoo their prisoners, the prisoners simply had to memorize their numbers. One Yom Kippur, grandfather gave one of his non-Jewish workers his bread because he was fasting. As a means of thanking him, the worker made him a leather and metal bracelet with my grandfather's ID number etched into it.

One night a soldier stopped my grandfather and demanded his ID number. Faced with no other choice, he slipped off his bracelet and handed it to the soldier. The next day a list of numbers were called to be shot, as a lesson to the rest of the camp. All but one person came forward. The camp ledger was checked, but the number did not exist! My grandfather looked down at his bracelet and realized that his number comprised digits that could be read upside down as well as right side up. He had given his bracelet to the soldier upside down, and the soldier dutifully copied down the wrong numbers. All the people who had been called up were killed. Thanks to a piece of leather and some crude metal I am able to have a grandfather.
It is a pretty ugly bracelet to look at, yet more precious than any other jewelry our family owns.
(Apparently, Moishe Perlman's identification number included only the numbers 1, 6, 8, 9, and 0, which read the same upside down or right side up.)

Try this recipe for Salmon Patties adapted from Moishe Perlman.

This story was particularly meaningful to KosherEye, since George was a close personal family friend who we have recently lost. May his memory be a blessing.

George Salo Stern was born in Brussels Belgium in 1937. He had a peaceful life in Brussels until he was 3. In May 1940, Brussels was bombed by the Nazis. Most of his extended family went to Israel when the Nazis came, and others went to the US. When his immediate family was forced to leave Brussels, he was not able to bring along any possessions. In 1940 George and his family were arrested and sent to Gurs, a displacement camp in France. His mother did not want to send him away with the other children, so she and his grandmother kept him in secret. The other ladies helped hide him. He tried to go outdoors as much as possible, and sometimes the ladies allowed him to run outside where he could run around or stare at rats. He was there for 3 months, and had to learn to be quiet.

The Gurs camp had a population of 2500 people. Out of pure luck, George's  mother and grandmother were included in the 800 who were freed; 1700 were sent to concentration camps where they perished. George and his family eventually obtained passage from Portugal to Cuba to the US and settled in Nashville, TN and then in Atlanta, GA. His message for future generations is that "we must always remember the past so that it does not happen again. We must always support the US because it is the land of the free and the home of the brave".