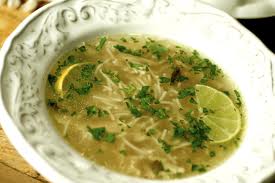 For many the concept of chicken soup is either tied to matzo balls or feeding a multitude of sick family and friends. Let me suggest that we take a step back from what we think we know and talk about how almost every culture has a version they believe is the ORIGINAL one.
We know that all you really need to make chicken soup is a chicken and a liquid (usually water) of some kind. What parts of the chicken make the best soup? Well, hold on to your collective cooking hats because

as far as I could tell with all my research, there isn't one part of the chicken (except the head and feathers) that one culture or another doesn't use in some recipe for chicken soup. Some recipes call for actual chicken feet. Others use just the bones. Some recipes ask you to keep the skin on and others say take the skin off. A few may ask for cut up pieces and a similar one wants you to plunk a whole chicken in the pot. So while every culture has a chicken soup the variation comes in the form of "extra" ingredients like vegetables, pasta, herbs and spices as well as how slow or fast you cook it that determines the endlessly varieties of chicken soups recipes.

As for chicken soup being good for you and curing the common cold, well, yes, it does, sort of but it's not a cure, just a helpful, delicious, feel better supplement. You're supposed to drink plenty of liquids when you're sick, so chicken soup works. Most of the recipes contain a fair amount of salt so it's sort of like you're slurping down a delicious salty gargle. It sooths the throat as well as removes the nasty bacteria that's making you sick. The heat and the steam from your soup can also temporarily help unclog your sinuses. And most importantly, chicken soup just tastes good and it's easy to digest.

So with the weather changing and our need to start planning our fall menus, I humbly offer the following chicken-soup-with-a-twist recipes that can be served to guests, sick loved ones or to anyone just looking for the perfect comfort food. 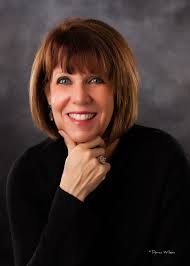 Eileen Goltz is a muti-talented syndicated food columnist and writer, event planner and host of Slice of Life on NPR. Born and raised in the Chicago area, she graduated from Indiana University and the Cordon Bleu Cooking School in Paris. She writes for the Journal Gazette and various newspapers, magazine, websites and blogs throughout the United States and Canada. She was recently voted the most popular event planner in Northern Indiana and her blog is CuisinebyEileen.wordpress.com. She is the author of the Dormroom Cookbook and Perfectly Parve Cookbook (Feldheim) and is a contributing writer for the OU, Chicken Soup for the Soul Book Group, Chicago Sun Times, Detroit Free Press and Woman's World Magazine.