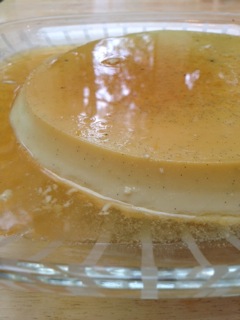 I'm about to introduce you, the avid and discerning kosher cook, to your new best friend. Don't worry -- you can thank me later. Coconut milk will dazzle you! It's versatility will impress you: it can be sweet  - it can be savory; it's full–bodied texture will make you forget all about Dairy, and may I mention how rich it is!?

I came to know coconut milk and appreciate it's fine qualities when I was working on the Thanksgiving chapter for my cookbook "Get Cooking! A Jewish American Family Cookbook". Of course I had to have a pumpkin pie recipe, and of course it had to be dairy-free so that it could be eaten after the big Turkey Meal. Condensed milk or half-and-half is what makes the iconic Thanksgiving dish a smooth and creamy dessert but what makes it problematic for the Kosher cook. Rigorous experimentation with nut and soy milks ensued, but it was a helpful hint from a creative cook that eventually led me to a can of coconut milk.

Immediately after opening that can of full-fat coconut milk I was struck by how thick and bright white it was. The scent was slightly sweet and coconutty, which had me a little concerned. I like coconut flavor, but not enough to have my Thanksgiving desserts taste like tanning lotion. So when I removed the coconut milk pumpkin pie from the oven and sliced into it, I held my breath. I noted its firm yet supple texture just like the dairy version. And it smelled as it should, sweet and warmly spiced. But tasting was proof. I exhaled, and then inhaled my sliver of creamy Thanksgiving pumpkin pie. It had a slight suggestion of coconut which only added to its yummy flavor.

I became semi-obsessed with it. I used it in a gamut of baked goods: coffee cake, banana bread, muffins. All to scrumptious ends. Then I moved on to savory recipes: chicken curry- thumbs up, pan gravy a revelation! Swedish meatballs- not so much. Other than the meatballs, I was never disappointed by it.

And then I decided to really put coconut milk to the test. As a committed caramellow I delight in desserts like flan and crème brulee. And up until my introduction to coconut milk I viewed these compositions in sugar and cream as strictly existing in the Dairy Zone. Not meant to be trifled with and made-over as Parve. But I had come to know it quite well, and I believed in it's flavor and textural aspects. And it did not disappoint. Smooth, custardy, more vanilla than coconut. It was a dreamy-creamy ending to an elaborate fleishig holiday meal.

Coconut milk is an ingredient that can generously add to Kosher cooking and eating. It is easy to locate, offers many options, and did I mention it's rich- in a non-offensive way? Don't thank me, just introduce it to your friends and other avid and discerning kosher cooks.

Rachel Harkham is the author of Get Cooking: A Jewish American Family Cookbook written with Doni Zasloff Thomas. For more fun and tasty recipes check out www.reciperachel.com