We recently had the opportunity to view the film, Jerusalem, screened at the Imax Theater located at the Fernbank Museum of Natural History in Atlanta. The experience was captivating, breathtaking and meaningful. This extraordinary film presented the multi-cultural and cherished sites of the city of Jerusalem, its history and its people. The film captures the intersection of science, history and religion in Jerusalem: a city sacred to half the people on earth; fought over more than any other place in history; conquered and destroyed, rebuilt and reinvented repeatedly for over 5,000 years. This is a family friendly film, a dazzling visual journey for older children and adults.

Dr. Jodi Magness is one of the film's scientific stars. She holds a senior endowed chair in the Department of Religious Studies at the University of North Carolina at Chapel Hill: and is the Kenan Distinguished Professor for Teaching Excellence in Early Judaism (since 2002). She graduated from Hebrew University and holds a doctorate in archeology from the University of Pennsylvania. We had an opportunity to chat with Dr. Magness and learn more about archeologists and her current dig in Israel.

How long have you been interested in archeology?
The answer...since she was 12. Her 7th grade teacher taught world history and the history of Ancient Greece. And that was where her passion was born. Archeology takes patience and passion. Digs are a lengthy process. 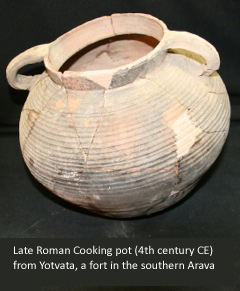 What cooking or food related artifacts have been uncovered?
All archeologists uncover food items – because life is connected to food. Actual foods disintegrate- since usually most are not preserved...but seeds including olive pits are often found. Another common find are animal bones- sometimes even with the butchering marks. And cooking pots with remains of meat. Finds include pottery used for cooking, serving and storage. Specialists study all of the various finds.

What unexpected and exciting discoveries have you made?
Her team is currently working in the village of Huqoq in the Galilee– and has uncovered late Roman 6th century mosaics... Some of the mosaics that have been found are thought to be connected to the biblical Samson, and another grouping with the Maccabees. http://www.unc.edu/campus-updates/new-mosaics/

Who owns the artifacts you discover?
They belong to the State of Israel. Finds are processed and then remain in the host country.

When is your next dig and can people view it or join it?
Dr. Magness will be working on her dig at Huqoq in the summer of 2014. Read about the dig, and how participants and donors are welcome! http://www.jodimagness.org

For more information about the film, or to purchase tickets:
visit http://www.fernbankmuseum.org/experience-imax/jerusalem/
(Through April 3, 2014)