Wonderbag - The amazing non-electric slow cooker
Boil it - Bag it - Slow Cook it - Serve it  and. . .
Learn how to use it for Shabbos 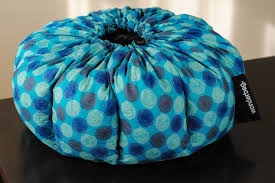 The Wonderbag is a simple, revolutionary non-electric, heat-retention cooker that allows food that has been brought to a boil, to continue cooking after removing the food from the fuel source. No plugs, no batteries, no connection,no fuss...totally non-electric. Heat-retention cooking is an age-old technique and Wonderbag's fun and unique design is 21st century. It continues to cook food that has already been brought to the boil by conventional methods. Sealing the pot in the Wonderbag creates a slow cooking process.

The Wonderbag was initially designed for developing countries where energy is precious. The company was founded by Sarah Collins of South Africa, and was entirely family-funded. Since its inception, she has hired over 2,000 women in Rwanda to sew Wonderbags. When a Wonderbag is purchased, another is donated to a family in rural Africa, where more than a half-million have been distributed. International buyers include busy moms and foodies use their bags Wonderbags to cook dinner while they work or to bring warm food to dinner parties, picnics, tailgate parties and camping trips. In the U.S., the Wonderbag is available through Amazon and costs $50.

With a Wonderbag you can cook nearly any slow-cooked recipe such as stew, chili, rice, grains, soup, steel cut oatmeal and more. And it's easy! To kick-start the cooking process, food is heated in a pot on the range or cooktop, brought to a full boil, and then the entire lidded pot is simply placed in the Wonderbag, which is tied  tightly by simply pulling the fabric together. The food will slow cook for up to 6 hours and stay warm for up to 12 hours. It follows the cooking principal low and slow, and will not burn. It is portable, perfect for sharing with neighbors, great for potlucks or outdoor parties, and best of all Shabbos!

When we first tested the Wonderbag, we consulted with  Rabbi Yechezkel Freundlich, who is now Rabbi of Congregation TBDJ, of Montreal.  We wanted  to clearly understand how we could utilize it for Shabbos, and here are the results:
Prior to the onset of Shabbos, still boiling hot foods such as soups and stews can be placed in the insulated Wonderbag and used just as the instructions specify. The foods can be kept in the fully insulated Wonderbag until ready to serve. Since the heat in the Wonderbag is retained for up to 6 hours, this allowed us to have very hot soup on Friday night, without leaving any fire source on.
There are 2 ways that the Wonderbag can be used on Shabbos:
1. During Shabbos, pots may be placed in the Wonderbag with the top and lid of the pot peeking out higher than the walls of the Wonderbag, and without the Wonderbag lid covering the pot. This would work well for dishes such as Cholent (stew) pots, which are started prior to Shabbos.
2. If a fully cooked and hot cholent or stew is poured into another serving pot (perhaps a soup urn) during Shabbos, the insulated Wonderbag can be utilized in its entirety- with the lid. And, then, the hot food can be transported in the Wonderbag, even on Shabbos.

Yom Tov: Since cooking is allowed on Yom Tov, the Wonderbag can be used as it is fully intended with lid and tie, providing an excellent new tool for slow cooking and maintaining heat. Another nifty use? One reviewer says she used a Wonderbag to keep an ice cream cake frozen for three hours.

Yes, we think that this is a "Wonder-ful"  kitchen tool!  Learn more about this warming tool and Click here to order a Wonderbag