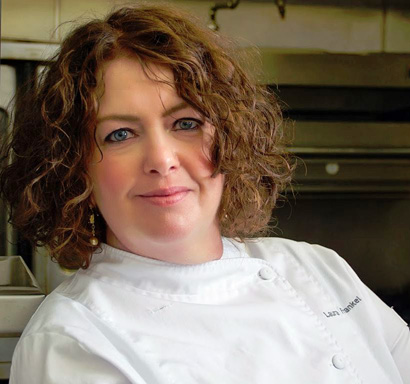 Laura Frankel is the Executive Chef at Wolfgang Puck Kosher Catering at the Spertus Institute for Jewish studies in Chicago. She is the author of Jewish Cooking for All Seasons (Wiley) and Jewish Slow Cooker Recipes (Wiley). Chef Laura is an avid farmer's market supporter, giving demos and teaching classes all over the country featuring market produce.

Chef Laura is the former chef and founder of the Shallots restaurants. She has training and extensive experience in both savory and pastry kitchens She opened her first restaurant in 1999, offering kosher fine dining with a produce-driven menu. Frankel opened Shallots NY in 2000 in midtown Manhattan. In 2004, she moved her Chicago restaurant to Skokie, (a suburb with a large Jewish population outside of Chicago) and created Shallots Bistro.

In the fall of 2013,  Chef Laura was honored at the KosherFeast media event, as an innovator and pioneer in Modern Kosher Cuisine.  And in February 2014, Laura was the cameo guest jokester/performer in the hilarious Chicago production of Old Jews Telling Jokes. We would say that Chef Laura is quite a talented multi-tasker!  And, now for you lucky New York area foodies, Chef Laura will be the guest executive chef at the Center for Kosher Culinary Arts first ever Chef's Table.

The fabulous, fun and funny Chef Laura has created these recipes for KosherEye readers. They are creative, delicious and festive, perfect for your Purim Seudah or any time of year that you wish to make your guests feel like royalty.