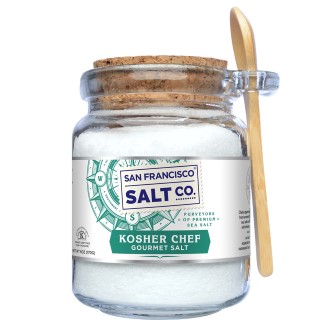 Flash back a couple of years and peek into the KosherEye pantry. Like most, it contained four types of salt— kosher salt, sea salt, traditional table salt and pickling salt. However now with so many gourmet salt choices available, when we reach for salt, we have to actually think and select the correct one for each use. Which SALT for which purpose? Shall we use smooth and elegant truffle salt; Pink Himalayan sea salt? Grey salt? And with which salt shall we fill our table salt shakers? Along with types of olive oil, specialty coffee, and of course wine, salt has grown from being a “boring take it for granted” single staple in the kitchen to a gourmet garnish, finishing and flavoring ingredient. By the way, at KosherEye we still do use simple coarse kosher salt or coarse sea salt in our meat and poultry rubs, and in our pasta water. But here’s our gourmet new salty story…. All of these salts are KOSHER CERTIFIED

Lee Williamson is founder and President of the San Francisco Salt Company, which launched in 2002. He turned his ”lifetime dream of becoming an entrepreneur” to eventually shake up the world of salt. Williamson created the San Francisco Salt Company to fill a void in the online salt market. The company gradually grew to become one of the largest specialty salt suppliers in the country. The salt is curated globally from the best quality salt suppliers- selected for taste, texture, and appearance. Just a pinch can enhance the taste of a meal to go from mundane to marvelous.

San Francisco Salt Company produces a variety of gourmet salts, and we present a few we sampled and enjoyed, accompanied by the company’s use and sourcing descriptions. As we discover more, we will share more of our salt story:

French Grey Sea salt is a natural sea salt from the western coastal area of France. The salt is "moist" and unrefined. It is favored by the top chefs in France and all around the world. French Grey salt is formed as the seawater flows into the Guerande Marshes during high tides. It remains a light grey, almost light purple color because of the clay from the salt flats where it is collected. The salt is collected by hand using traditional methods. It is fine grain, and is considered by many to be the best quality salt available. This salt has gained popularity in the culinary world. San Francisco’s French Grey salt is carries the Nature & Progrès’ certification label from France. It’s suggested uses include using as a finishing salt, and its mild flavor makes it an ideal flavoring for soup, salads, pastas and sauces. 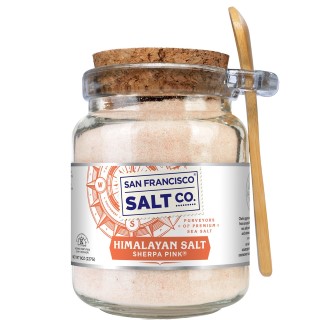 Sherpa Pink® Himalayan Salt  is quite different from salt found anywhere else. Some consider it uniquely beautiful: it has a pinkish tint, and under a microscope, the crystals within the salt form perfect geometric patterns. Himalayan salt, when left raw and in its natural state, is rich in nutrients and minerals, easily absorbed and utilized on a cellular level. Pink Himalayan salt re-mineralizes the body with minerals and trace elements essential to health and well being.

Suggested uses include cooking/food seasoning, as a gourmet table salt (fine grain only or in a grinder), and blending with flavorful herbs.
Popular for culinary use as a gourmet food salt.
Due to its natural harvesting process, this salt may arrive slightly damp because of moisture in the salts.

Fleur De Sel
Fleur de Sel, French for “Flower of Salt”, is hand collected from the Guerande Salt Marshes of France, using centuries old techniques. Guerande “paludiers” harvest this salt by skimming the very surface of the salt ponds, obtaining only the salt crystals formed on the top layer. It is certified from the Nature & Progrés institute in France, a strict certification process ensuring purity and excellence.

Fleur de Sel salt is esteemed by chefs as the most amazing sea salt for culinary use with its very delicate flavor, light and moist texture and high mineral content. 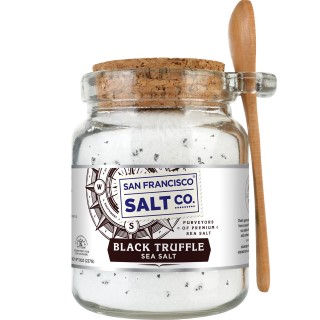 Black Truffle Salt
This exquisite finishing salt from Italy is salty, earthy and rich. It is actually natural sea salt enhanced with black truffle flakes. The grain size is fine, perfect for garnishing and finishing dishes. It is growing in popularity in upscale restaurants as a finishing touch for steak, pasta, potato and egg dishes.

Interesting salt educational information can be found at the Mayo Clinic.