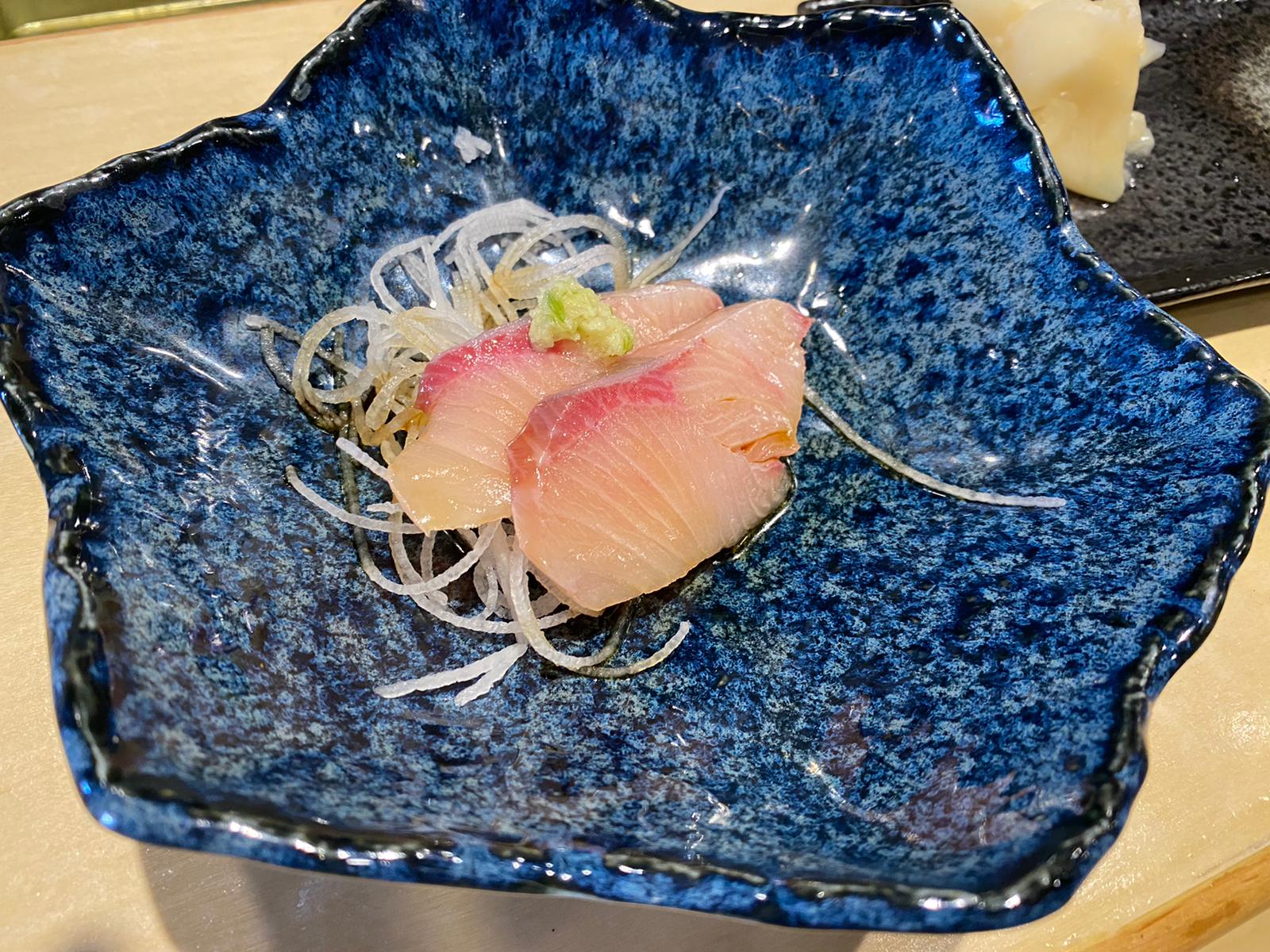 Written by Jeff Davis, Director of Culinary Experiences at Koshereye

Pictures by Donna Davis, Director of the Gluten-Free Division at Koshereye

Jeff and Donna are based in NYC, both huge food enthusiasts. Jeff has an eye for perfection in culinary experiences. His passion is to paint that picture for you and to inspire you to go and explore. In the coming months, Jeff and Donna will be crawling the kosher sushi scene to find you the top 10 authentic sushi spots in the USA in a series we are calling "True Sushi by Koshereye". Sushi as we know it comes in a roll with sweet mayo and sweet sauce, however, the world of sushi goes far beyond the version we all know.

Recently, KosherEye traveled to Avenue M in Midwood, Brooklyn to check out a newly opened kosher sushi restaurant, Koma Sushi. We, at KosherEye, are used to the run-of-the-mill kosher sushi restaurants in the five boroughs where the rolls are heavily-laden with spicy mayo, crunch and an assortment of vegetables that typically mask the flavor of average to sub-par fish. However, we were pleasantly surprised that the staff and ownership at Koma Sushi work extremely hard to elevate the sushi-eating experience.

Upon entering the restaurant for lunch service, we observed a full wood sushi bar in the front of the restaurant with an open seating area in the back of the restaurant. The sushi bar was made of a traditional, light wood that appeared to be bamboo. The décor consisted of wall paneling of multi-colored woods and panels of floral imagery. Upon entering Koma Sushi, we were immediately met by the owner, Elchinon. He was extremely personable and was available to answer any questions about the restaurant. He described how he sources his fish from over five suppliers from around the world and specifically chooses his suppliers not based on cost but instead based on freshness of the supplied fish. Elchinon showed us a beautiful whole yellowfin tuna that the restaurant had just received. 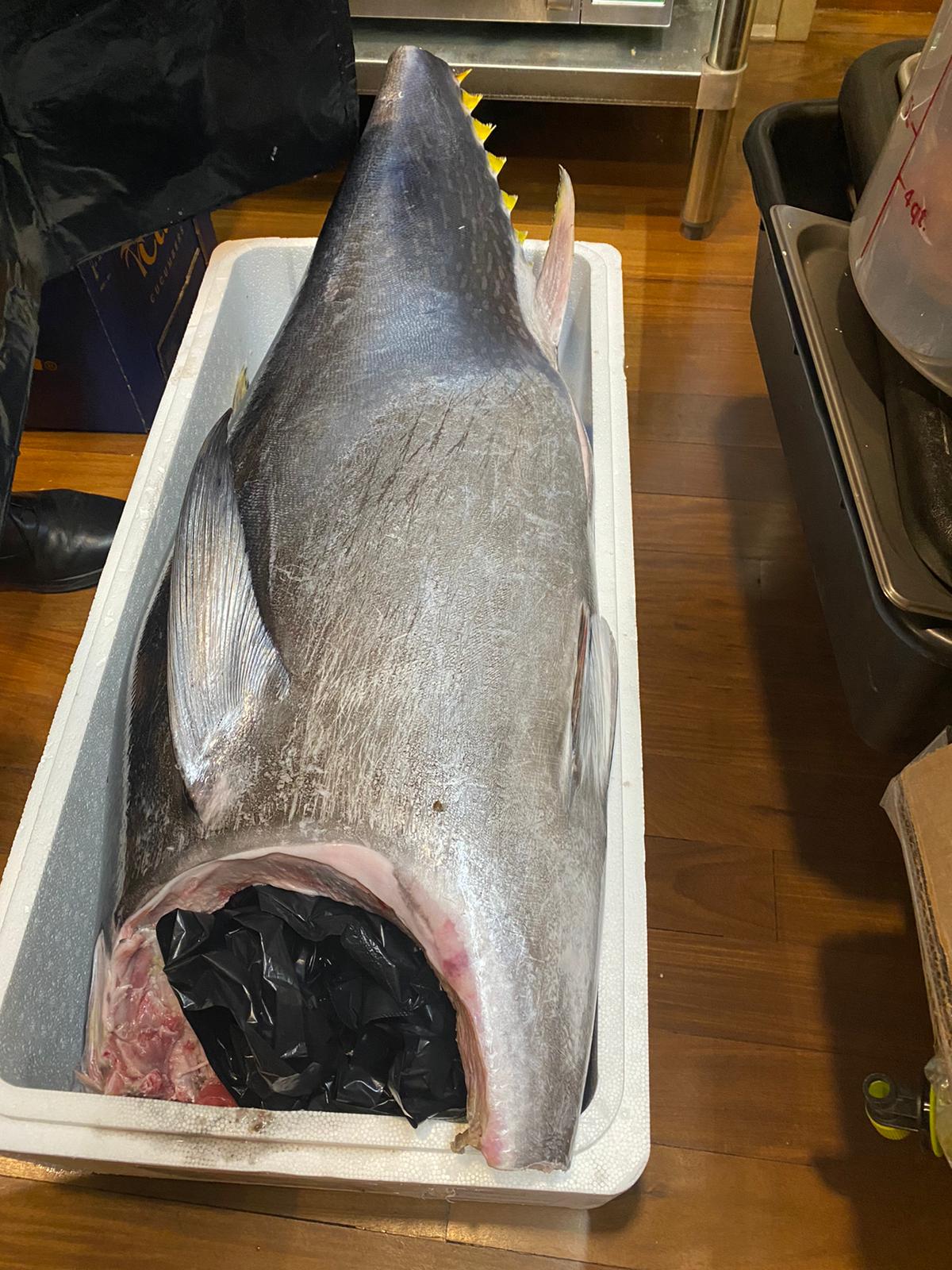 We were also pleased to find that Covid protocols were in place and enforced. All staff properly wore masks, diners could maintain social distance and all diners were asked to provide contact information should contact tracing become necessary. As well, the restaurant is currently designing an open back patio for diners who are still wary of eating inside.

While Koma Sushi provides a wide assortment of traditional rolls as well as sushi and sashimi, we were drawn to the restaurant for the omakase. Omakase, often found in the best sushi restaurants, constitutes a meal consisting of dishes solely selected by the sushi chef. In that omakase requires the chef to have attained a certain level of proficiency in sushi-making and in that omakase requires high quality fish, this type of service is typically not found in a kosher sushi restaurant. Koma Sushi offers an eight course omakase lunch for $40.00 and twelve course omakase lunch for $70.00.  We ordered the twelve course lunch. We were first provided with what seemed to be unlimited edamame and bowls of miso soup. Then the joy began. Our first course consisted of hamachi, also known as pacific yellowtail, with a scallion sauce and soy marinade that was so sweet and so fresh that it melted in our mouths. Our second course consisted of the striped bass with a hint of wasabi. Striped bass should have just enough fat to taste slightly buttery but not so sweet as to taste oily.  The striped bass hit the mark. We both remarked as to how well the buttery flavor of the fish contrasted with the spiciness of the wasabi.  Next, we received toro with ginger. Toro is the fatty belly of the tuna. Immediately after eating the toro, we each noticed that the fish had warm, comforting tones on our palates. After these three dishes, we noticed that the chef was transitioning from mild flavors into spice and smokiness and then into traditional fish flavors. The chef was slowly preparing our taste buds for more bold flavors. We appreciated that the experience did not just constitute a collection of random dishes on plating, but instead was thoughtfully executed. 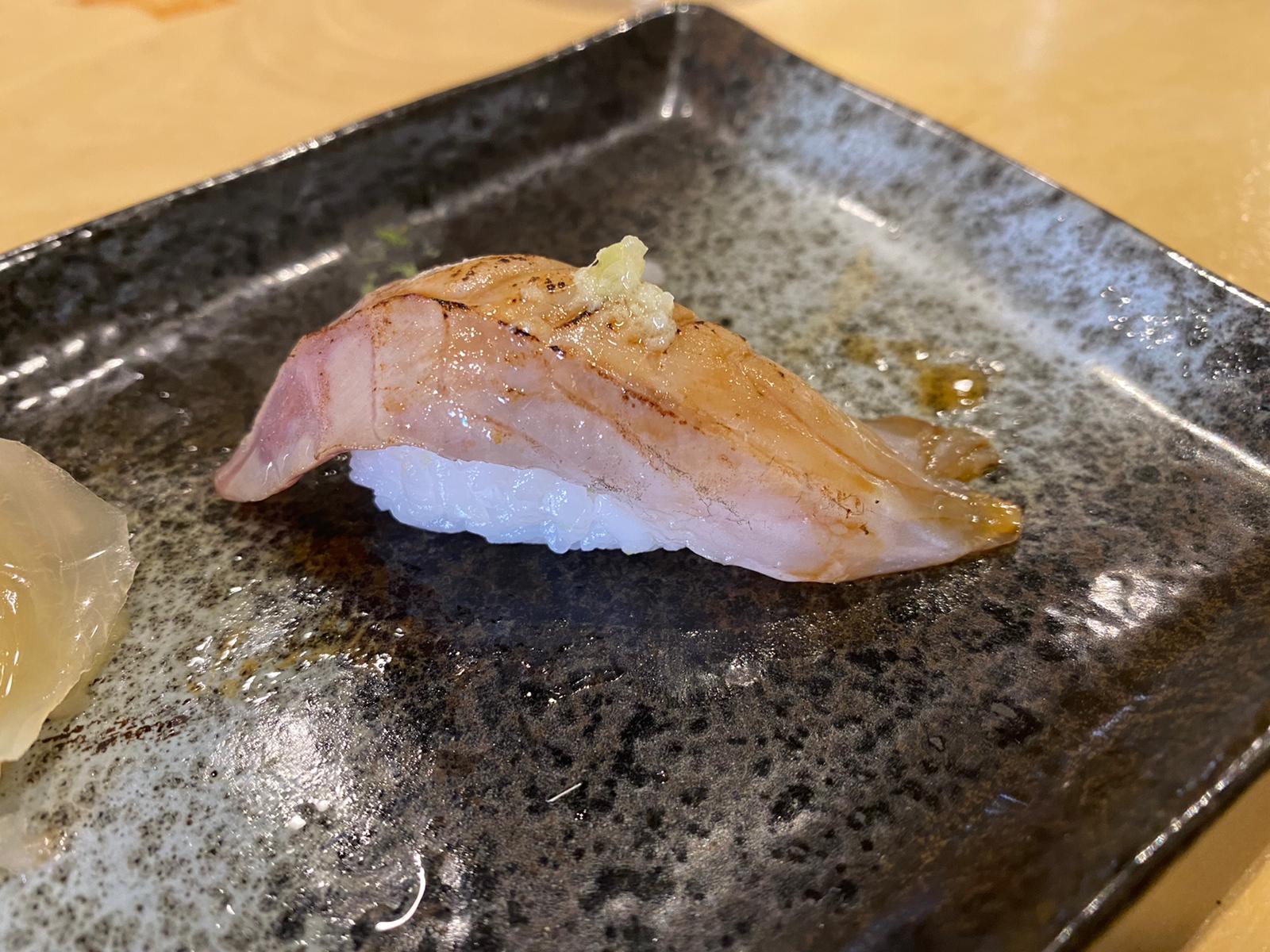 The fourth dish was another piece of hamachi with a jalapeno glaze. The dish had a light texture with a mild amount of smokiness.  The fifth dish was my favorite of the day. I am not usually a salmon eater but the chef prepared a slightly fatty seared salmon with a mayo and soy glaze. I first appreciated that the chef permitted the restaurant’s mashgiach to inspect and ignite the searing torch at the sushi bar. Once the fish was properly lightly seared, it was placed in front of us. This was the best piece of salmon that I have ever eaten (the salmon my sister-in-law makes for Shabbos is awesome too!!!!!)

The sixth dish of the day was a red snapper seared with garlic on top. The red snapper had a slightly sweet, nutty flavor that was perfectly complemented by the searing and the garlic glaze. Next was my companion’s favorite dish of the day, salmon toro with sweet miso sauce. My companion (my wife) described the salmon toro as being slightly fatty and very tender. She loves salmon and described this dish as one of the best pieces of salmon she ever had. The eighth dish was a slightly seared seabass with ginger scallion. All I can say is “yummy.” The ninth dish was a seared otoro with a chutoro on top. Otoro, or fatty tuna, and chutoro, medium fatty tuna, are often combined in sushi dishes to complement each other. The taste of the rich otoro perfectly complemented the sweeter, leaner chutoro. The dish actually seemed to melt in my mouth. 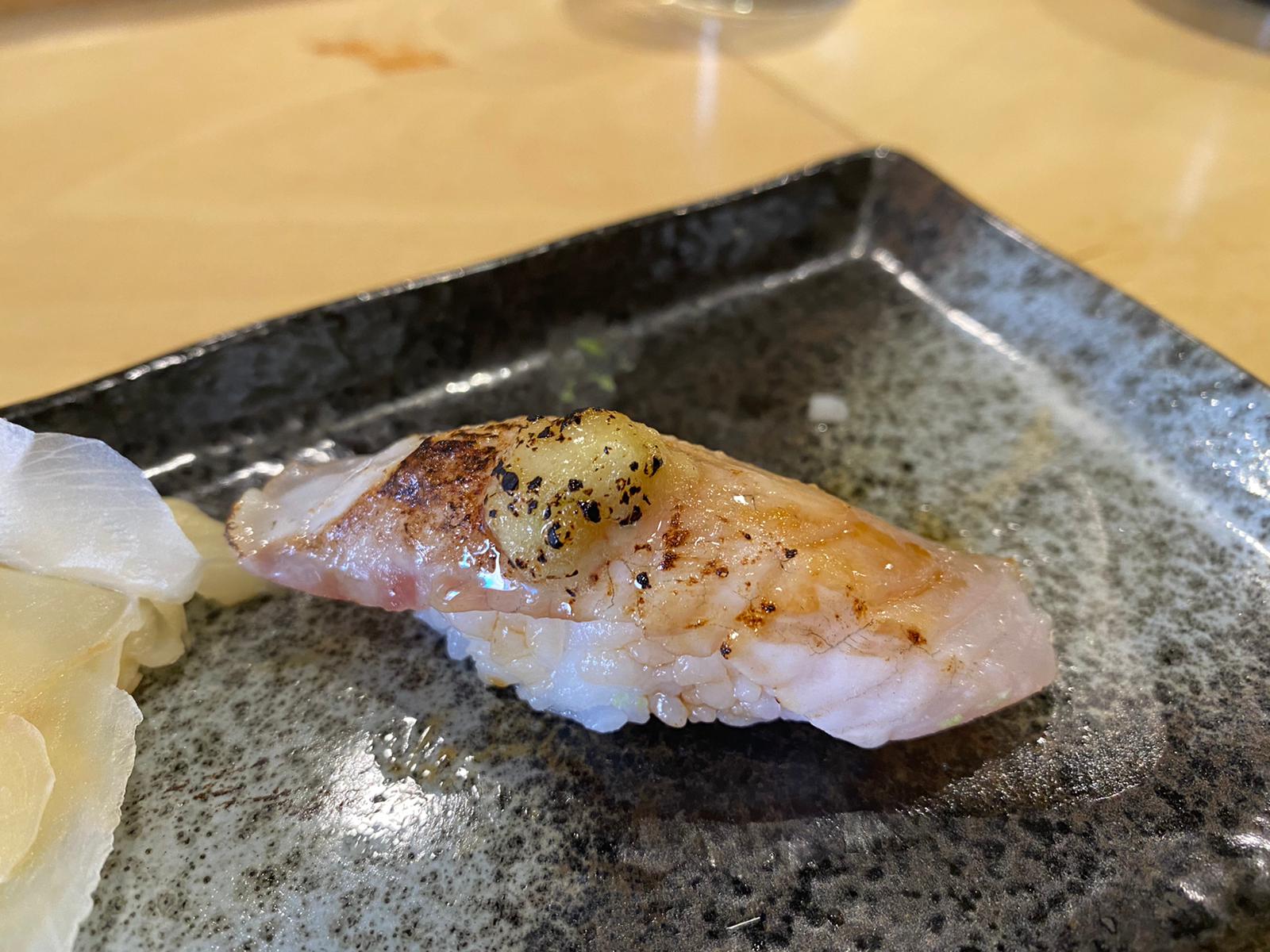 Next came the purist fish-lover dishes. We received a mackerel with ginger. While I am not generally a fan of mackerel, I appreciated that this had a sweet taste with a slightly oily texture. My wife assured me that the mackerel was perfect.

The final three dishes (they gave us an extra dish) were a salmon roll with large red fish roe on top, a seared king red snapper with sweet chili sauce and an otoro with truffle oil. My wife, a lover of red roe, told me that the salmon and roe combination popped in her mouth.  The king red snapper had a firm texture and mild sweetness that was not overwhelmed by the chili sauce. I am a huge fan of truffles so when the chef drizzled the truffle oil over the final otoro dish, he created the perfect conclusion to a memorable lunch. Alas, the experience came to an end. We left with full bellies and smiles on our faces.