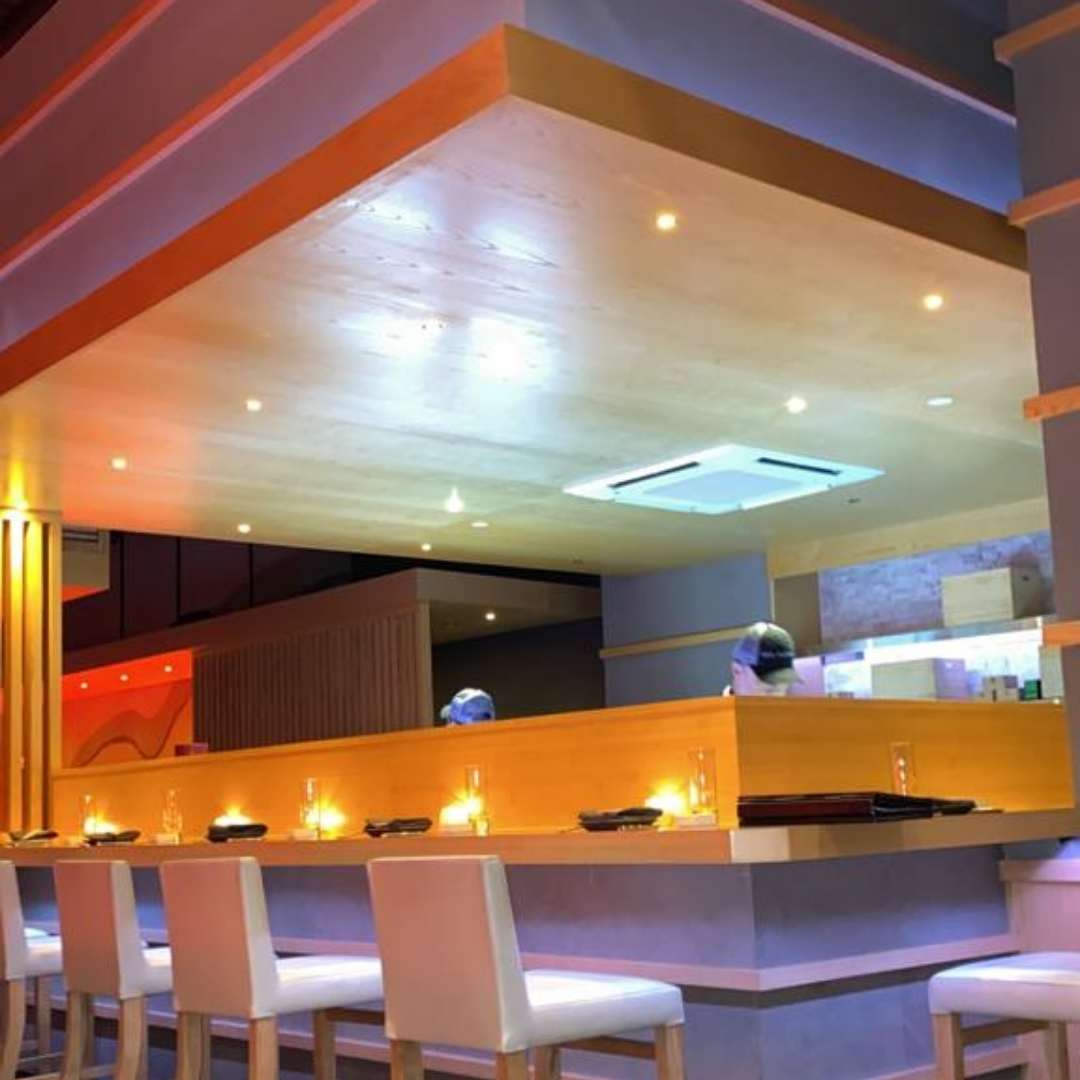 Written by Jeff Davis, Director of Culinary Experiences at Koshereye

Pictures by Donna Davis, Director of the Gluten-Free Division at Koshereye

Jeff and Donna are based in NYC, both huge food enthusiasts. Jeff has an eye for perfection in culinary experiences. His passion is to paint that picture for you and to inspire you to go and explore. In the coming months, Jeff and Donna will be crawling the kosher sushi scene to find you the top 10 authentic sushi spots in the USA in a series we are calling "True Sushi by Koshereye". Sushi as we know it comes in a roll with sweet mayo and sweet sauce, however, the world of sushi goes far beyond the version we all know.

There are many misconceptions about Jews and about the food we can eat. Although we do love our gefilte fish, we also love our Kosher Japanese Peruvian fusion cuisine. On a rainy Tuesday night, Koshereye trekked to the heart of midtown to indulge in the culinary masterpieces from Sen Sakana (Japanese for a thousand fishes), newly re-opened as a Kosher eatery specializing in Japanese Peruvian fusion cuisine.  Located on 44th Street across from the Harvard Club, the Sofitel Hotel, and down the block from Grand Central Terminal, Sen Sakana seeks to capitalize on the reemergence of Midtown Manhattan, post-pandemic. At Sen Sakana, Executive Chef Mina Newman, an alumnus of Drew Nieporent’s Layla and Dylan Prime, seamlessly blends Japanese and Peruvian flavors and dishes, showcasing the dishes that resulted when, in the 1800’s, Japanese people migrated to Peru.

Upon entering the dining area at Sen Sakana, we were surprised by the aesthetic of the space. Japanese architecture, heavy on the use of wood tones, is juxtaposed against Latin design, with each of the many rooms having unique elements evoking Peru. Throughout our subsequent meal, the overhead lights slowly dimmed and were replaced by deep reds from recessed lighting in the walls around us. Latin beats complemented the alluring ambiance created by the deep red lighting. We could see that Sen Sakana caters to a diverse crowd of young singles, the Five-Towns set, modern Manhattanites, and Heredi Jews from Boro Park. Surprisingly, we observed a large contingent of non-Jews throughout the space, also enjoying the eclectic cuisine to the rhythm of Latin bass. We were impressed that the management of Sen Sakana has managed to create a space that appeals to both a kosher crowd and a non-kosher crowd.

Our meal began with the Classic Fluke Ceviche. The Classic Fluke Ceviche consisted of fluke in a ginger and lime marinade with a Peruvian cancha (crispy corn nut) garnish. The fluke ceviche was excellent. The sheer size of the slices of marinated fluke assured us that this would be a different experience than most kosher sushi restaurants. Aside from the sheer size of the dish, the fluke with the ginger-lime marinade was extraordinarily refreshing and could almost be described as a dish designed to prepare the palate for the bold flavors of Japanese Peruvian cuisine. Of note, Sen Sakana is not just a sushi restaurant and the bi-level kitchen produces dishes such as Beef Yaki Soba, miso braised short ribs and even Cote Boeuf Tomahawk steak. As well, per the management, Sen Sakana will soon be available to cater private events off-site. 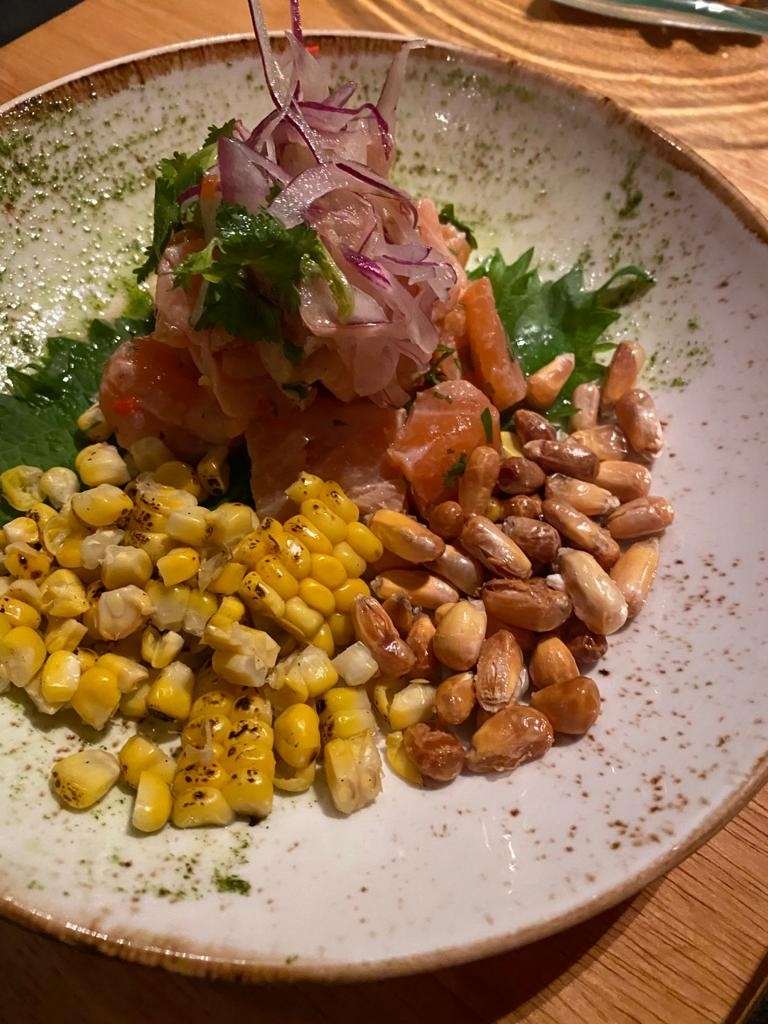 We next had a second ceviche, the Ceviche Nikkei. The Ceviche Nikkei consisted of lightly torched salmon with crispy Peruvian corn, shiso and a sauce, provocatively called “Yuzu Leche D’Tigre.” or “Yuzu Milk of the Tiger.” Yuzu is a citrus fruit grown in Latin America that has a fragrant, acidic taste. Leche D’Tigre is normally created by combining lime juice, sliced onion, chilies and salt and pepper.  The addition of Yuzu to the mix gave the sauce a real kick that was balanced perfectly when paired with extremely fresh and satisfying lightly seared salmon. The garnish of the crispy Peruvian corn popped in our mouths and delightfully added to the flavor medley of the dish.

We were also served chilled Kamoizumu Shusen Junmai sake to complement the Ceviche Nikkei. The sake was light, dry and matched closely with the acidity of the salmon ceviche. Of note, the Kamoizumu Shusen won the Gold Award in the Junmai category of the 2015 U.S. National Sake Appraisal.

Next, we treated ourselves to the Sen Sakana Omakase. Omakase is a sushi experience where the sushi chef selects the customer’s sushi dishes. At Sen Sakana, the omakase menu consists of four pieces of sushi, eight pieces of sashimi, a tuna maki roll and Nikkei toppings. According to staff of the restaurant, Sen Sakana sources its fish from Japan and from local fishermen. Our omakase selection consisted of sashimi and nigiri including Japanese snapper, fluke, salmon,  chutoro (fatty tuna), seared salmon with cucumber, very fresh tuna slices, a tuna maki roll, shima-aji (a light and buttery fish from Japan), tuna with acevichado sauce  (a beet-based sauce from Peru), fluke paired with gooseberry and finally, fluke paired chilaca sauce (a smoky sauce using chilaca pepper). While each piece of fish in the omakase was outstanding, I was absolutely blown away by the fluke with chilaca. The lightness of the fluke was evenly matched with the boldness of the chilaca. 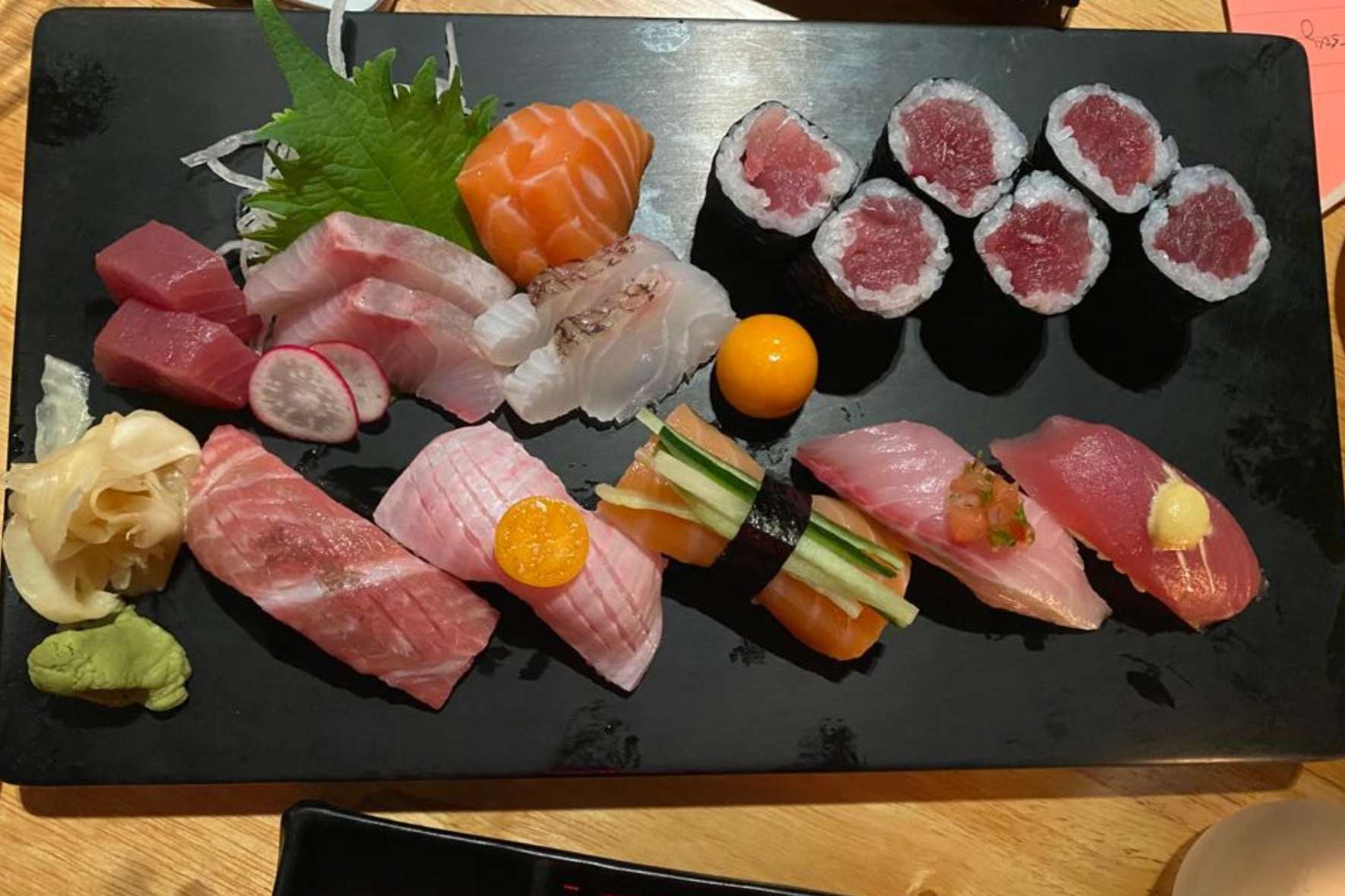 Guess what! We didn’t stop there. While our bellies were getting full, we kicked our meal into another gear. We indulged in two cooked fish maki rolls. First, we had the Green Dragon Roll. This HUGE roll consisted of kani tempura and cucumber topped with chunks of sliced avocado, topped with crispy quinoa and garnished with a Japanese sweet sauce. The combination of the kani tempura, avocado and crispy quinoa created a unique flavor that I am still craving.  We also had the Grande Roll. The Grande Roll again was extraordinary in size and again was made up of kani tempura and cucumber, but contained spicy tuna, crispy quinoa and Korean chili sauce. I am always up for spicy tuna.  I will eat supermarket spicy tuna. I will eat spicy tuna that has been in the fridge for two days. I will eat that last lonely piece of spicy tuna left on the Shabbos platter two hours into the meal. I LOVE SPICY TUNA!!!!! So, when I took the first bite of this amazing roll and felt the crunch of the tuna as it blended with the crunchy quinoa and the Korean chili sauce, I knew that I had found the spicy tuna holy grail.  This roll is excellent in every way! Then, just when I thought my spicy tuna experience was coming to an end, the Korean chili sauce began to slowly warm the back of my mouth, comforting my palate. 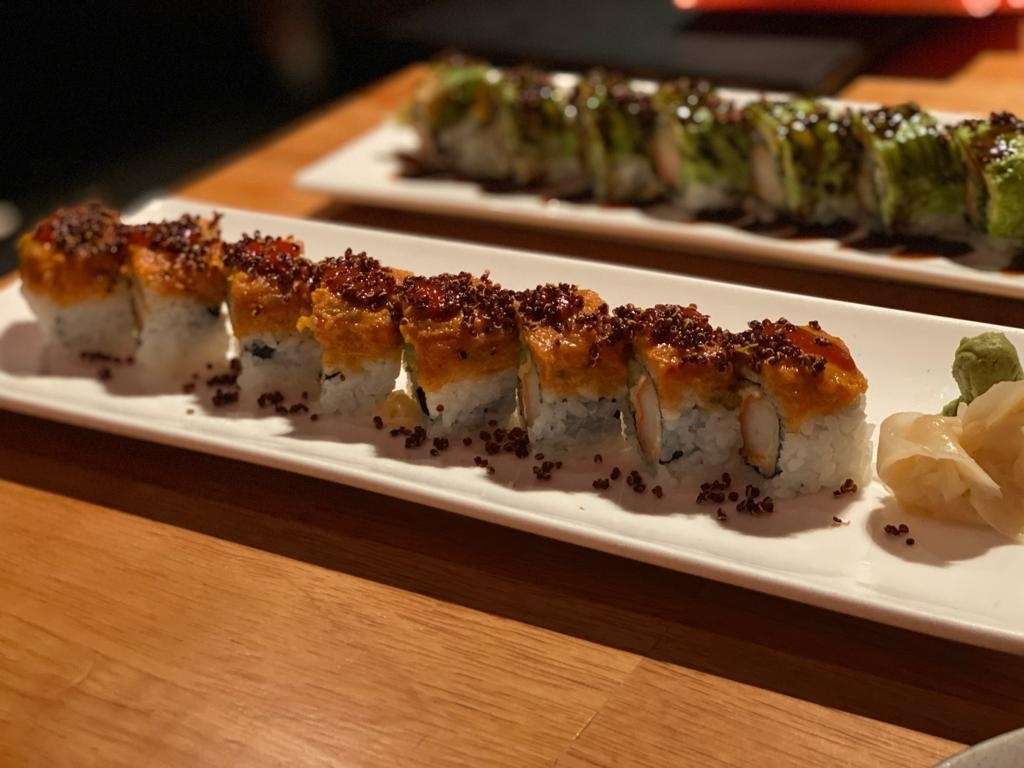 At this point, we were way past the trouser breaking point. As I was gasping for air, I looked down at the table and saw that another dish called Lomo Saltado (“Loin Stir Fry” in Spanish) had arrived.  I was too full to indulge anymore. My wife, while also very full, attempted, for journalistic integrity, to at least taste the stir-fry beef but was only able to take tiny bites. She noted the tenderness and the quality of the beef used in the stir-fry. She also noted that the dish’s marinade of tomatoes, onions and garlic soy complemented the lean cut of beef. 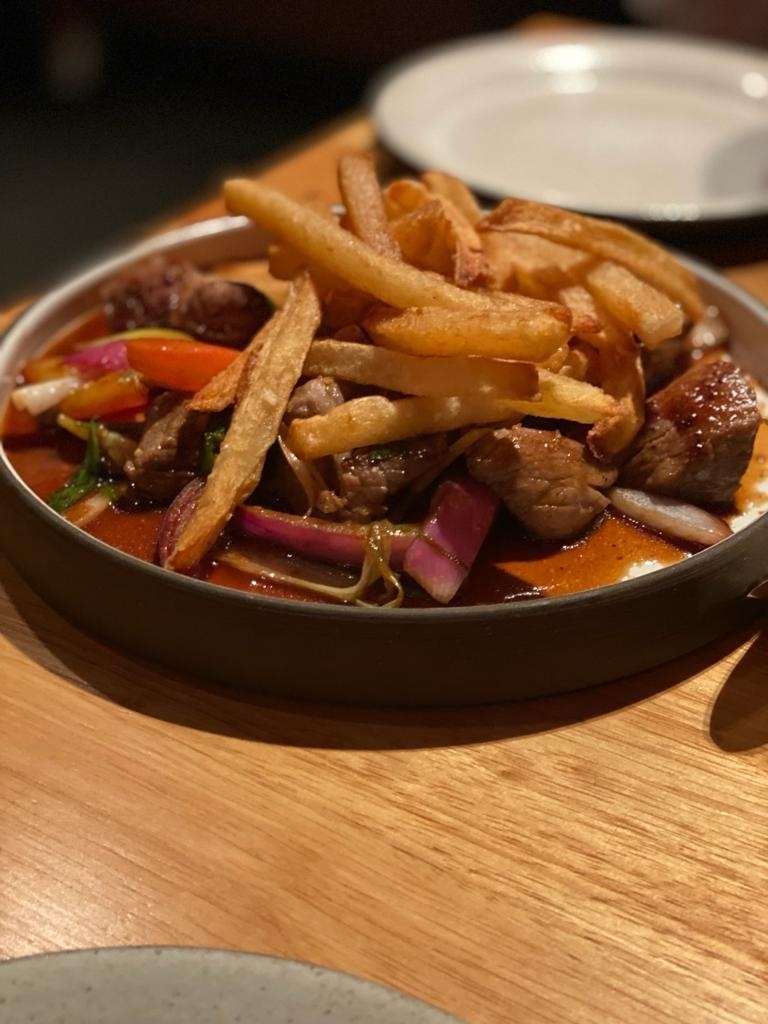 We couldn’t eat anymore. The Lomo Saltado was packed up and we attempted to leave the restaurant. Actually walking to our car after such a meal was tough but we eventually did it. When we arrived home, we immediately fell into sushi comas. We had a great time. The food was great, the space was exciting and fun and the staff went out of their way to make us feel special. I would especially like to thank our server, Euclides, for treating us so kindly.

You can find out what else we eat by clicking here!