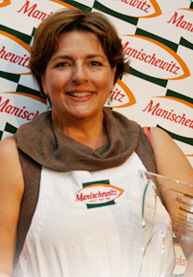 How to Win a Cooking Contest From a Two–Time Winner

Everyone dreams of winning! When we buy that $1 lottery ticket for the $50 million possible payoff, we have already decided  how to spend the money and whether to choose the cash option.

Let’s see… after we pay the taxes, we’ll have at least $25 million remaining for home improvements, some traveling and quick luxuries,maybe a new car, a vacation home, family education and assistance, a chunk in savings and at least 2.5 million (10%) for Tzedakah.

Well, our new KosherEye "Foodie" Friend, Sarah Freedman–Izquierdo, didn’t quite win the multi–million dollar lottery, but has won prizes in two separate cooking contests. Her latest victory was the honor of being the grand prize winner in the 2010 fourth annual Simply Manischewitz Cook–off.

Originally from Philadelphia and Washington DC, Sarah lives in Miami Beach. Her interests have included spinning, theater, and reading; but since childhood, she has had a passion for cooking.  Sarah’s very busy working mother (an economist) and father (a lawyer) had little time for extensive kitchen duties, so they nurtured Sarah’s proclivity and talent for cooking. Sarah enjoyed cooking for the household and took pride in “playing in the kitchen”.

When Sarah chose a career, it followed that she chose jobs which complemented her interest in cooking. She was a gourmet buyer at Epicure Gourmet in Miami Beach, and along with a partner, founded a marketing business, Finesse Unlimited; a company assisting global sellers to succeed in the U.S. market. Many of their clients are in the food industry.

When her father became ill earlier this year, Sarah spent an extended time in New York. Her food passion once again emerged. While there, she took wedding cake decorating classes at The French Culinary Institute. In fact, she enjoyed it so much, she has scheduled more.

Now, the rest of the story. How to win a cooking contest… How did Sarah come up with the recipe that she entered into the Manischewitz cook-off?
Twelve years ago she entered a Bacardi (rum) cooking contest. She submitted a recipe for Mango Tarte Tatin, Coconut Crème Anglais. She was so excited when notified that she was a runner–up, would be flown to Rhode Island (naturally all expenses paid), and was a $1,000 winner. Now, her husband makes this winning recipe all the time!

Over the years, her friends encouraged her to enter more contests – comparing her to famous TV cooking star, Ina Garten. She started looking for possible contests, but rejected them because she didn’t like the products. Just one week before the Manischewitz entry deadline, she saw the cook-off information. She tried the all–natural broth, which was a must in any recipe entry, and was impressed, so she decided to enter.

The contest rules stated that two Manischewitz items, including the new natural chicken broth, had to be used.  She researched possible recipes, which would include a broth, and decided that Chinese Sho Mei dumplings were trendy, interesting, and do-able. The challenge: developing an easy dumpling recipe without its usual ingredient– pork. She had to change several ingredients (certainly the pork), use a total of eight ingredients (which included the above mentioned Manischewitz products), and be able to prepare the recipe—start to finish—in 1 hour or less. It had to be kosher and she wanted to maintain the authentic aroma and flavor. To achieve this, she decided to substitute a filling of ground turkey, to replace the non-kosher ground pork, and used sesame oil, sherry, garlic and ginger. And that is how her winning Mandarin Dumpling Soup recipe was born.

She entered in the last week of the contest, and then forgot about the entry. Time elapsed. Sarah said, “I even threw out the file. Then, on one of my visits to N.Y. to visit my dad, I got the unexpected, exciting phone call that I was a finalist. (Remember, I had discarded the recipe file!)  As a finalist, I was invited to take an all-expenses paid trip to New York to demonstrate my recipe.”

The Cook-off:
“On March 18, 2010, I prepared my recipe in front of  head judge Jacques Pepin, one of the founders of New York’s The French Culinary Institute. He, along with a small panel of judges, watched each person preparing their recipes and asked questions of the contestants. There were four other finalists.  Everyone, including the other contestants and the judges, were very nice. It was a great experience."

Yes, she was nervous to prepare her creation in front of the judges, the media, and Manischewitz representatives. She had to complete the recipe within an hour from start to finish. Since she knew that she had a tendency to get nervous, she decided that whatever dish she entered had to actually take less than 40 minutes.

The Cliffhanger:
Since by chance, she was the last person to be “judged”, there was an additional challenge and she was worried. The finished dumplings had to either sit in the broth (which would cause them to likely get soggy) or sit out (they would dry out until the judging panel got to her.) She solved this problem by compromise; she poured some broth over them, although she admits the bottoms did get soggy.

But, this is all history now – her Mandarin Dumpling Soup won the grand prize.

“The other contestants were very nice.” Sarah pointed out that several of them enter contests regularly. She noted that a contestant from Ft. Lauderdale is a “regular” man who wins quite often and called him a “ professional contest enterer”. This gentleman used to be a non-cook, but now he enters cooking contests all the time.

Sarah urges potential contestants to enter contests often and regularly. There is absolutely nothing to lose, except some time. Remember—at the worst—you just won’t win. She hopes to enter more contests.

Sarah prepares her now famous recipe often. She even created a “tweaked” Passover–friendly version. Shortly after her win, during pre–Passover 2010, a local Miami area TV station asked her to demonstrate her recipe. She went on TV and turned the dumplings into a kosher for Passover matzo ball version, Mandarin Surprise Matzo Balls.

The Grand Prize:
Sarah  didn’t win the lottery, but she did win a fabulous GE kitchen, $5,000 cash, and was told to go online to the GE website and enjoy a shopping spree! There were several deductions for taxes and delivery, but more than $15,000 left for shopping. Thus far, she has selected a brand new refrigerator with French doors, an energy saving dishwasher, a convection oven and hood, and a washer and dryer.

Her shopping adventure did not end there. She had enough money remaining to also purchase a range, dishwasher and refrigerator for her mother-in-law.

Sarah’s Contest Tips:
•  Create and practice a dish that you can relax with.
•  Find contests to enter online, in newspapers, magazines, and product ads.
•  Find contests with products and ingredients you like.
•  Amateur cooks should enter.
•  Think about re-working an online or cookbook recipe.

Questions for Sarah? Grand prizewinner Sarah Freedman–Izquierdo has graciously offered to answer your questions relating to entering food contests or questions about her recipes. (No, Sarah is not eligible to enter the Manischewitz cook-off - grand prize recipients can win only once!) Please send us your questions to KosherEye at Contact Us and we will post Sarah’s answers. Do tell us if you decide to enter the Manischewitz Cook–Off!  KosherEye hopes that you will. Just do it!

Check out the other semi-finalist recipes at Simply Manischewitz Cook-Off Recipes.