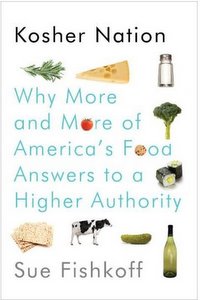 , by Sue Fishkoff (Schocken Books), traces the growth of kosher certification in America.  No longer is kosher just a holy way of eating for a small population of observant Jews; it is big business, booming big business.

Fishkoff provides a detailed history of kosher in America; where it’s been and where it seems to be heading.  She reports that most kosher certified products are now manufactured not by small Jewish owned companies, but by mainstream multinational corporations such as Nestle, Kraft, General Foods, etc. “Kosher food is big and growing fast, increasing at twice the rate of non–kosher. Nearly one–third of all new food products in the country are now kosher certified.”

The book points out that the tipping point likely came early in the 1990’s, when companies such as Entenmanns, Nabisco, and Godiva went kosher for first time, which produced a snowball effect. Later in  the 1990s came the pièce de résistance for kosher eaters, none other than the kosher Oreo. And then even the White House  kitchen went kosher for the first time, in  2005, for the  president’s annual Chanukah party. There are a growing number of kosher restaurants throughout the U.S. offering untraditional foods but trendy kosher equivalents, “the same organic greens, fine (kosher) wine and seared tuna as non–kosher.”

Some remarkable statistics contained in Kosher Nation:
Nearly 11.2 million Americans buy kosher − 13% of the adult consumer population. These people purposefully buy the products because the products are kosher, and not by chance.  Only 14% of consumers who buy kosher, do so because of religious “kashrut"; 86% of buyers are not religious Jews buying the products. Many are not Jewish at all, such as vegetarians, vegans, lactose intolerant, gluten allergies, Muslims, (when Halal is unavailable) and 7th day Adventists. The growing popularity of kosher is due to a perception that kosher products are cleaner, safer, and better. 62% buy kosher because they believe it is higher quality. ..that there is an extra pair of eyes on products.

According to Fishkoff, in the meat industry, kosher certification does act as a safeguard to good health. For beef to be certified as kosher, the animal must have no diseases or physical flaws. “Downers, cows who cannot walk, are not permitted but do make it into the non–kosher meat supply.”

Changing attitudes:
Dietary practices based on health or ethics is now trendy and front–page news. Kosher food, and the food industry, are hot topics. Kosher food shoppers spend an average of $1,000 more each year than ordinary consumers, creating quite a lucrative market. More and more American shoppers are understanding that “Kosher” means fit or proper— based on Jewish law, rituals, regulations and customs—and that a kosher product  “ is not blessed by a rabbi”. Glatt kosher meat has become the industry standard for OU certification. “Non observant liberal Jews have replaced hostility to kosher certification with curiosity and even pride.” More home kitchens have gone kosher.

Some of the latest mega companies to go kosher are Tootsie, Jelly Belly and Gatorade. Major hotels, stadiums, cruise ships have kosher options; there are kosher vending machines in airports and colleges. Kosher Passover trips are plentiful – kosher options are everywhere and growing!

In Kosher Nation we learn that until 1935 the OU, the Orthodox Union, was the only agency offering nationally recognized supervision. The OK kosher agency was created in 1935, and then Kof-K and Star-K. These are known as the “big four” and certify most of the food in the U.S.  However, by 2009 there were more than 1,000 individual rabbis and organizations offering their own heckshers (certification marks). In addition, there has been some consolidation and buyouts in the field. For example, just a few years ago, the OU bought the Half Moon K.

Fishkoff tackles the issues of bagged greens, the monitoring of bug infestation in fruits and vegetables, the emergence of small companies producing more ethical and natural kosher meat and poultry, the birth of eco–kosher activists,  the rivalry among kosher agencies, the spread of global kosher production, kosher “scandals” and the expansion of availability of fine kosher wines.

The book is fascinating. A very readable page–turner for those interested in kosher. It is a must read and an important library addition for anyone interested in the history, trends and facts about the business of kosher in America. And, if you read it you will better understand why kosher products really do answer to a higher authority.

Read more of our Conversation with Sue Fishkoff. Kosher Nation is available on Amazon.com