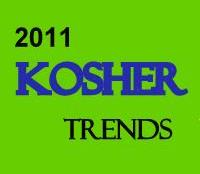 Locally sourced meats, produce, sustainable seafood, and urban gardens. There is an increasing interest in farm-branded ingredients, micro-distilled artisan liquor, artisan house-made craft beer, wine and ice cream, and backyard food gardening. The growing popularity of farmed “Fin Fish” is due to the emphasis on the benefits of  fish as a good source of lean protein and Omega 3's. Of course, kosher eaters will be searching for scales, along with those fins!

“Free-from” Food. Surveys indicate that 62% of consumers say they plan to eat healthier in the upcoming year. Sodium and sugar are being quietly reduced in mainstream product formulations. There  also is a growing rumble against high-fructose corn syrup, an ingredient that could possibly become a pariah along the lines of trans-fats. Take heed kosher manufacturers!

Transparency, Traceability –  Do Ask, Do Tell! Consumers want to know what they’re eating, from where it came and how it is being handled. Mad cow disease was only the beginning. There is so much more bad “stuff”  that can potentially reside in our food or result from bad handling, which is exactly why consumers want enhanced transparency and traceability. New food related federal  laws go into effect in 2011. Additionally, it has been reported more cities will start enforcing restaurant codes to ensure that restaurants visibly display their sanitation health department grades. One reason kosher certification is growing in popularity with mainstream America is  because it offers consumers an extra level of food label clarity.

The Home Cook is seeking food products, ingredients and kitchen tools to emulate the professional chef.  Home Cooks want to bring the gourmet, authentic, ethnic or restaurant experience home. They want more cookware and gadgets that are both efficient, functional and easily maintained. Since kosher cooks prepare more meals at home than their counterparts, this need is even more emphasized in the kosher home. By the way, the trend of men in the kitchen is growing too.

Food Apps, Couponing and Promotions. Group couponing and location-based food and restaurant promotions are booming and expected to continue.  The mainstream Internet leader is  Groupon, but in the kosher world there are two new entries − Jdeal and Jewpon. The Iphone app, Koshercookbook is a pioneer in kosher related apps.

High on Pie. The most widespread food prediction for 2011 is that this will be the year of the pie, yes the humble pie -  from sweet to savory. The pie is touted as the replacement for the trendy cupcake! According to well known food industry consultant Andrew Freeman, "If I had one trend − one trend of the year that I could predict, it would be the trend for pies." The website Nation's Restaurant News agrees; “Think deep-fried pies, and pie-flavored everything from shakes to ice creams and even bite-size pies.” Small pies will make it big! So, who is going to step up and become  the leading  kosher pie maker of America?

Grits are the hot new grain (We like this one, y’all!) Expect grits to leap from morning food to an all-purpose starch.  It’s part of another “trend-let”; down-home southern cooking. Grits are moving beyond the breakfast menu and above the Mason-Dixon Line. Grits are also gaining popularity because of their gluten-free status. Likewise are other gluten-replacing starches such as, quinoa, chickpeas and ancient grains such as kamut, spelt, amaranth. (Yes, all inherently kosher!)

Gourmet Hot Dogs and Sausage. No nitrites, no fillers, no artificial flavors, no MSG, no byproducts, and some are even organic. Ingredient clarity is emphasized in several kosher brands.

Beans. This lowly legume will shine in 2011, as a great source of protein, a healthy side dish and a staple ingredient in appetizers.

Sweet Potatoes will be “Orange-hot” in 2011. It is forecast to be the alternative, better-for-you French fry.

Macarons − we said macarons, not macaroons. The macaron, is a French confection that resembles a pastel-colored sandwich cookie. It is said to be making its way to mainstream U.S. tables in 2011. But will we be able to buy a kosher version?

Gourmet Ice Pops. Ice pops, known as paletas in Mexico, are  getting the artisanal treatment. Watch for them to go mainstream north of the border in 2011, and hopefully KosherEye will find a kosher brand.

Greek Yogurt. With about the same creamy texture as sour cream and a bit thicker than regular yogurt, it is a treat! Kosher brands include Greek Gods, Chobani and Oikos.

Some of the information for this article was culled from online reports and various Internet sources.