Martha Stewart likes these Ukrainian Blintzes, and so do we. But, are they really latkes? Presented on the Martha Stewart show by Martha's staff member Danielle Dolinsky, who is Jewish and of Ukrainian heritage,

As avid Martha fans, we decided to try them. The recipe took about 10 minutes to assemble and 15 minutes to fry these cheese blintzes. They are round, rich and certainly resemble latkes.  So let's call them cheese latkes. Did you know that the first latkes were actually cheese latkes? After you taste these, we think you'll want to return over and over again to this heirloom recipe. Top them with confectioners sugar, sour cream, crème fraîche.Thank you Danielle and Martha! 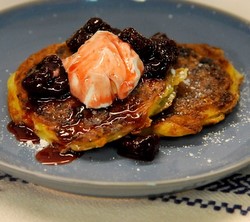