Holocaust Remembrance Day, April 19th, 2012 corresponds to the Hebrew calendar - the 27th day of Nisan. This internationally recognized date marks the anniversary of the Warsaw ghetto uprising. Congress established the Days of Remembrance as the nation’s annual commemoration of the Holocaust and created the United States Holocaust Memorial Museum as a permanent living memorial to the victims. Holocaust remembrance week is April 15–22, 2012. The theme designated by the Museum for the 2012 observance is Choosing to Act: Stories of Rescue. Watch the live webcast of the National Days of Remembrance ceremony in the US Capitol Rotunda on Thursday, April 19, at 11 a.m. 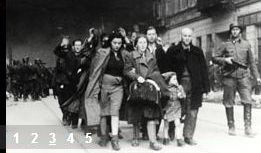