Humor has always been considered Jewish Novocain. So, if you simply want to laugh and set aside your “tsuris”, we recommend heading right to the off–Broadway production of  the hilarious Old Jews Telling Jokes currently at the Westside Theater, 407 West 43rd St. in NYC.. Created by Peter Gethers and Daniel Okrent, Old Jews Telling Jokes showcases five actors in a revue that pays tribute to and reinvents classic jokes and one–liners of the past and present. The show also features comic songs as well as tributes to some comedy icons of the past. The production is based on the website that actually inspired the show: Old JewsTellingJokes.com. If you’ve ever had a mother or visited a doctor – Old Jews Telling Jokes will make you smile. The jokes span the passages of everyday life – personal, business, love, marriage, and old age. And as others have qvelled: “You’ll laugh ‘til you plotz”. Be aware, however,  that some of the humor is R–rated.

if you would enjoy some weekly laughter sent to your inbox, do subscribe to their newsletter at oldjewstellingjokesonstage.com. 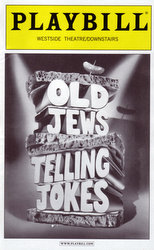 "Why don't Jewish mothers drink? They don't want to dull the pain.