The Haggadah is the centerpiece of every Passover Seder. Some of the richest artistic treasures of the Jewish people are found in the illustrations of the classic illuminated manuscripts of the Passover Haggadah, some dating back to the medieval period.

Our friend, Estee Kafra, cookbook author, and co-founder of KosherScoop.com has just brought to our attention that her great grandmother Fradel Kahan-Frankl and Fradel's son, Moshe Tzvi, Estee's grandfather, illustrated a magnificent Haggadah, known as the Kafra Haggadah, one that is said to have "dazzling imagery, breathtaking calligraphy and lavish ornamentation combining to create a visually stunning masterpiece in the realm of illuminated Haggados".

The Kafra Haggadah follows in the traditions of the classic illuminated Haggadahs. However, instead of being produced by unknown Jewish artists during the Renaissance, it was produced in Budapest, Hungary through an intense, year-long artistic collaboration between Fradel Kahan-Frankl and her son Moshe Tzvi. The name Kafra (Estee's name) is actually composite of the hyphenated last name.

The Kafras felt the need to create the Haggadah because of a disturbing experience. One day, Fradel and Moshe Tzvi decided to visit the Budapest museum to view the illuminated Kaufmann Haggadah, (14th century, Catalonia) but they were turned away. All efforts and entreaties to view the Haggadah proved futile. Frustrated, they decided that they could produce their own illuminated Haggadah in the classic medieval style.

And thus the Kafra Haggadah was born. Working on 24-inch by 12- inch panels, Moshe Tzvi wrote the text of the Haggadah in a very elegant and stylized form of the traditional calligraphic letters used for holy scrolls. Fradel painted elaborate decorative frames for the pages. She also added artistic adornments to the initial letters and painted many miniature representations of the dramatic scenes described in the text as well as some full page illustrations. The work continued for an entire year, which she often described as one of the happiest times of her life.
The family left Hungary after the war, and The Kafra Haggadah was published in 1947 by Philip Feldheim Publishing Company, then located on the Lower East Side of Manhattan.

In 2011, the family decided to release new edition, which, because of advances in printing technology, is even more vibrant than the first.

Fradel Kahan-Frankl passed away many years ago, but Moshe Tzvi survives her. The new edition is the gift of the family to their beloved grandfather. May he live to enjoy it for many years to come.

For more information or to buy the Haggadah, click here 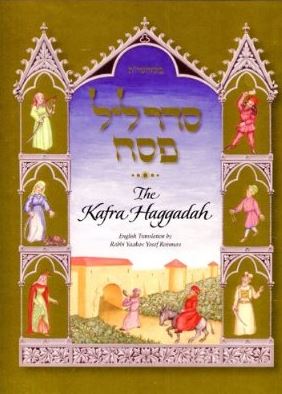