A Mesmerizing 30 Minutes at Kosherfest

At times, schmoozing with Ms. Geller and, at times, glancing back at the array of ingredients behind them, the three contestants produced a striking dish within the half hour allotted them. Frankly, I felt lucky that I was not a judge because it was just such a difficult choice. All three were simply outstanding and I would not hesitate to have any of them cook a dinner for me that included the president of the United States.

I usually get to see just snippets of one of the best attended events at the annual Kosherfest, the Annual Kosherfest Culinary Competition. This time, I stood my ground the entire 30 minutes. That's right just 30 minutes to watch three leading chefs of upscale kosher foods make an extraordinary dish. In the end it was Chef Casey Colaneri, the executive chef of the Sushi Metsuyan Restaurant in Monsey, NY and Teaneck, NJ, who won the $1000 prize. Chef Casey went so far as to predict that kosher cuisine would go far beyond where it is today. 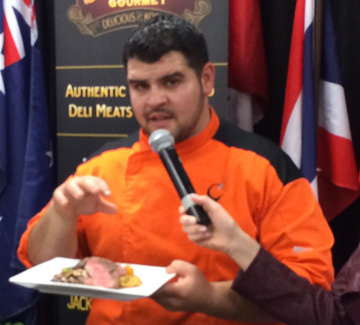 Each of the three competing chefs was given 30 minutes to cook one entrée from scratch using only a basket of mystery ingredients and a limited pantry of basic staples. Colaneri competed with Jose Soto, Executive Chef, Basil Restaurant in Brooklyn; and David Teyf, Chef & Owner, Lox Café at the Jewish Museum in Manhattan. The emcee was best-selling cookbook author and Joy of Kosher and Kosher Media Network founder Jamie Geller as host. The competition was sponsored by Jack's Gourmet, an innovative kosher meat company that made waves last year with the introduction of a high quality, surprisingly authentic bacon substitute made from beef called "facon." The panel of judges was comprised of Philippe Kaemmerle, Chef and Instructor at The Center for Kosher Culinary Arts, Jack Silberstein, Owner, Jack's Gourmet, and Roberta Scher, Co-founder and Managing Editor of Koshereye.com