The evening was co-produced by parenting blogger Esti Berkowitz of primetimeparenting.com and Roberta Scher co-founder and executive editor of KosherEye.com. Even as these pioneers were being recognized for their contributions to the kosher food industry, announcements of new projects were revealed. Gil Marks and Susie Fishbein will be collaborating for Zman Magazine, a monthly column featuring a unique presentation of Jewish culinary history and culture with panache. Joan Nathan shared news that the milestone series Jewish Cooking in America, which was nominated for the James Beard Award for Best National Television Food Show will soon be available on DVD. 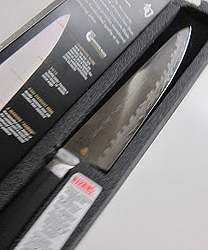 In addition to the Kosher Pioneers, there were surprises for those newer on the kosher scene. Several individuals were recognized for their vision, their entrepreneurial skills and their success in paving new paths in the kosher world. The 2013 Cutting Edge Kosher Awards went to Gloria Kobrin, developer of the KosherCookbook.com; Jesse Blonder, founder of the Kosher Culinary Institute, the first state-of-the art Culinary Institution especially for the kosher-minded chef, Jamie Geller of the Kosher Media Network, and Alex Rapaport of Masbia Soup Kitchen. Each was presented a specially selected chef's knife provided by Shun of Japan.