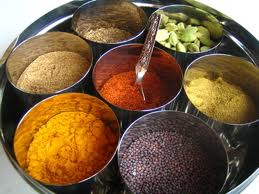 The combination and use of spices can turn a simple ingredient into a delectable delight. Indian cooking is a perfect example of using a mix of spices to awaken the taste buds. As with most ethnic cooking, the mix and use of spices is regional to the country, but there are the basic spices that most Indian recipes incorporate. The spices are used either whole − toasted to bring out the fragrance and intensify the flavor  and then ground − or purchased pre-ground. Many Indian cooks keep their most frequently used spices in a Masala Dabba Box, which is a round stainless-steel container with seven smaller compartments for different spices. Indian cooking relies on spices in a way unlike any other world cuisine − give it a try and you will be hooked...we are!

Ground Coriander: Mild, with an aroma similar to lemon, sage, and caraway. It is used in curry powder spice mixes, pickling, and soups.

Turmeric: Intense yellow-orange color and related to ginger. Used to flavor and color food and is used in curry powder blends and plays an important role in imparting an appetizing golden color to dals and vegetable dishes.

Whole Mustard Seeds: Small, round seeds varying in color from black to brown to yellow are ubiquitous in southern Indian cooking, where the tempering of the oil in countless recipes begins with the addition of them. They pack a punch that is intensified in hot oil.

Whole Green Cardamom: This is the second most important spice in India after cumin seeds. The pods are used whole or ground.  It is an ancient and extremely flavorful spice that is native to India and is used in both sweet and savory dishes.

Try this tasty recipe for Crusty Russet Potatoes with Coriander – it is delicious!

Available at most national grocery stores and local Farmer's Markets

*source:  How to Cook Indian by Sanjeev Kapoor