"You scream, I scream, we all want an egg cream"
Those who grew up in NYC have egg cream memories. The Egg Cream is a nostalgic symbol from days gone by, and Jeff's Sodas is hoping to make the egg cream a part of future memories.

Despite its name, the egg cream contains neither eggs nor cream. In the beginning, it was a soda produced almost exclusively in New York, specifically Brooklyn.

As Jeff's Sodas explains "Legend has it that the first product that could be described as an egg cream was developed during the early 1890's by Louis Auster, a Jewish immigrant who owned a candy store in Brooklyn. Later, around 1920, Moisha Zambrowsky, owner of Moisha's Luncheonette on the Lower East Side of Manhattan dispensed the product from his fountain." Over the next few decades, especially in the NY area, soda fountains were popularized in luncheonettes and candy stores, and one of their premiere products was the popular egg cream. However, traditional fountain service began to disappear in the 1970s and 80s, and with that trend the ubiquitous egg cream waned. But, Egg Cream America, Inc. - manufacturer of Jeff's Sodas, has now reinvented the egg cream tradition. It is a bottled, dairy based carbonated beverage, Kosher Certified OU-D.

We got creamed by Jeff's! So convenient, ready to drink, just chill and serve. 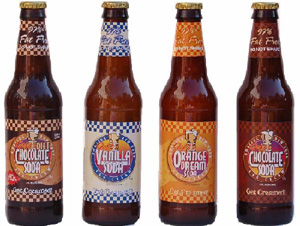 Orange Dream: This one tastes like the Good Humor Creamsicle ice cream bar of our memory, sweet, tart, rich, creamy.

Chocolate Soda: The one that tastes the most like the egg creams of our beloved Bronx, when we visited the corner luncheonette.

A diet version of the chocolate flavored soda is also available.

For more information or to order visit: Getcreamed.com

Want to make your own egg cream? Here's the recipe:
The Original Brooklyn Chocolate Egg Cream from Fox's U-Bet