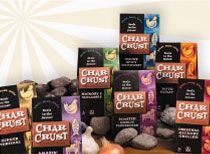 In 1957 Nathan Silver began experimenting with dry-rub seasonings and crusting techniques at his legendary Chicago restaurant, Al Farber's. Now almost 57 years later, his family's seasonings known as Char Crust® are famous for their signature rub Char Crust® . The rubs are popular in both restaurant and home kitchens throughout the USA and Canada.All 10 Char Crust® flavors are certified kosher by the CRC, and are used to enhance dishes such as beef, poultry, fish and more. They are easy to use-- Simply dredge and rub the blends onto the surface of uncooked meat or fish, then broil, bake, grill, pan-sear, or roast.